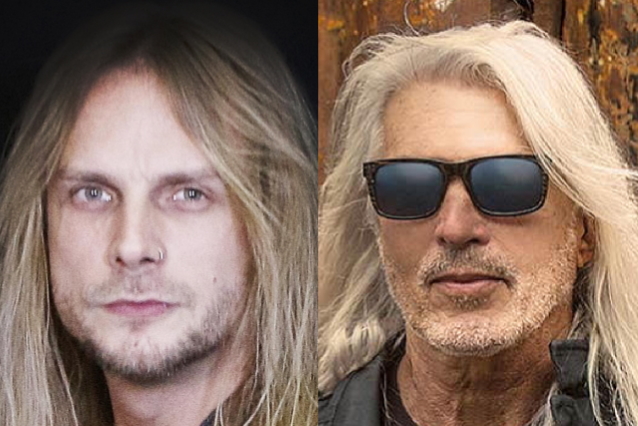 DOKKEN's legendary axeman George Lynch became a grandfather for the fifth time when his daughter, Mariah Lynch, and JUDAS PRIEST guitarist Richie Faulkner, who is her boyfriend, welcomed their first child, a baby girl, in July 2020. Asked in a new interview with Anne Erickson of Audio Ink Radio how being a dad has changed his life, Richie said: "It's incomprehensible, really. You can't really put it into words. It's not about you anymore. It's about this little being that you're responsible for. That show [JUDAS PRIEST] did in the U.K. [at the Bloodstock Open Air festival in August], I shed a tear because it was so emotional. And I looked down off the side of the stage, and there was this little human being that wasn't there before. And I shed another tear. [Laughs] I sound like a bit of a crybaby, but it was just a lot of emotion.

"Two years ago, we were on stage in Las Vegas for the last show of the 'Firepower' tour," he continued. "Fast forward two years, we're back on stage, and there's this little human being down there with a leopard skin jacket on and chucks and a pair of ear defenders, and she was rocking out. So, it's unbelievable. And every day is a different journey. She loves DEF LEPPARD; she headbangs to DEF LEPPARD, which is an amazing thing. So, yeah, it's a trip. And we're looking forward to seeing how her life shapes up and who she becomes. So, it's amazing."

As for what it's like having George Lynch as part of his family now, Faulkner said: "George is great. George has got a very English sense of humor. He's kind of dry and sarcastic, which I really like about him. You don't get that very often in the States — I've found, anyway. So, apart from being a great player, he's been a great father. And he's a great grandfather to the baby, and he loves her. He's playing her guitar. He sings to her. And, obviously, watching George play, George has got a very unorthodox style and always has done. He always stuck out, really. There were five guys at that time, in my opinion, that really stuck out, and he was one of 'em — as someone who was not only a shredder but someone who had something unique to say on the instrument. He's still got that unique quality. And it's a joy to see him play and learn stuff from him. And he's funny. That's the main thing."

Asked if he and George would ever write and record a song together, Richie said: "Yeah, we've jammed. He came over to the house a few times, and we jammed some stuff in the studio. And, of course, you never know what the future holds. I'd love to do a track with George. He's an incredible player and just a workhorse. He doesn't stop. He's either writing or recording. Recently, he's been out on the road again. He's a workaholic, almost. Again, he loves what he does, I think. So, yeah, that's great to see. But, yeah, I'd love to play with George — let's put it that way."

George broke the news of his fifth grandchild's arrival in an Instagram post in July 2020. He shared an adorable photo of Richie bottle-feeding the baby, with Lynch shredding the axe in a chair only several feet away. "New baby time .big chubz>little chubz>micro chubz. the most precious perfect creature in the present universe entered our world July 8th xo", George wrote.