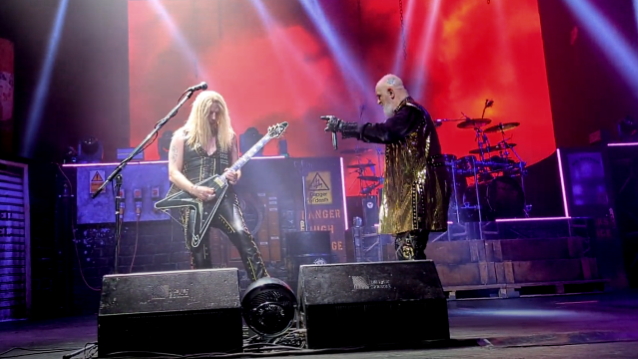 RICHIE FAULKNER 'Offered To Opt Out' Of ROCK AND ROLL HALL OF FAME Performance: 'I Didn't Need To Be There'

In a new interview with Lauren "Lern" Elwell of the KSHE radio station, JUDAS PRIEST singer Rob Halford spoke about Richie Faulkner's participation in the group's performance at the Rock And Roll Hall Of Fame even though the guitarist wasn't being inducted along with his bandmates.

"He's a miracle man, especially when you consider what he's been through with his challenges," Rob said, referencing the fact that Faulkner suffered an aortic aneurysm and complete aortic dissection during PRIEST's performance at the Louder Than Life festival in September 2021 (as transcribed by BLABBERMOUTH.NET). "And he needed to be there. Because originally he said, 'I don't think I should be on stage.' I go, 'Richie, you have to be on stage. It's important. I can't properly express the words 'cause it's a feeling for me. I feel you need to be on that stage with us.' And so did everybody else; everybody else felt that way.

"But yes, he's a miracle man, and for that reason alone, amongst a ton of others, it was important that he was on that stage and showing people the wonders of survivability and the great things that the medical profession and the healing and the health world can do, and some of the Lord's divine intervention, all of these things kept Richie with us," Halford added. "I said, 'Richie, you need to be on that stage, especially if you can do some hair whipping with K.K. [Downing, former PRIEST guitarist]' They do their hair whip. [Laughs]"

Asked what it was like for him to perform with both Tipton and Downing, Faulkner said: "Well, for me, it was great. Obviously, I'm a huge PRIEST fan — I have been for a long time and always will be, so that hasn't changed. So to be part of a three-guitar-attack team, which PRIEST has never been before, as far as I'm aware. I'm sure there's someone on the Internet that can dig through the archives and find maybe a gig they did once before. But as far as I'm aware, PRIEST has always been known as that twin-guitar attack, so be up there with Glenn and K.K. as part of that three-guitar attack was… it was an experience. If it was a one-time experience or whether it was something for the future, who knows? But even if it was a one-time experience, it was just something to relish and just to remember forever, really. It was fantastic."