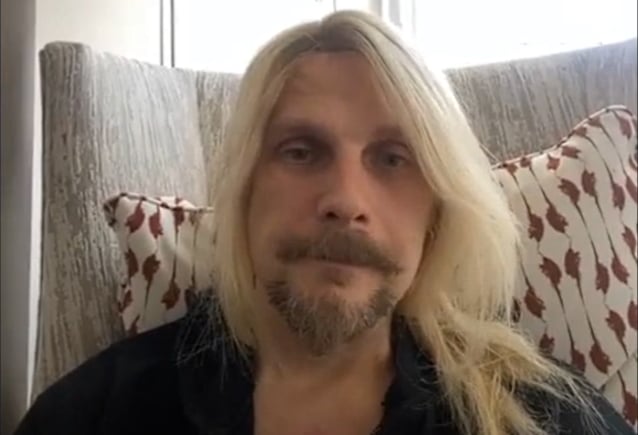 JUDAS PRIEST guitarist Richie Faulkner has once again opened up about the life-saving surgery he underwent a little over a year ago.

On September 26, 2021, the now-42-year-old British-born musician suffered an acute cardiac aortic dissection during a performance at the Louder Than Life festival, just a short distance from Rudd Heart and Lung Center at UofL Health - Jewish Hospital in Louisville, Kentucky. It took the hospital's cardiothoracic surgery team, led by Dr. Siddharth Pahwa and also including Drs. Brian Ganzel and Mark Slaughter, approximately 10 hours to complete the surgery, an aortic valve and ascending aorta replacement with hemiarch replacement.

Faulkner, who returned to the road with his PRIEST bandmates in March, reflected on his health setback in a new interview with radio personality Steve Rex Gabriel. He said (as transcribed by BLABBERMOUTH.NET): "It was a complete aortic dissection. So the aorta that goes around the heart and goes all the way down to the groin, the whole thing dissected… It was the surgeons and the doctors and nurses, they saved my life; that's how I'm still here. I think it's, like, a two percent survival rate from what happened to me. A lot of people, they don't make it to the hospital; they go down and they don't get up.

"When it happened, it all happened so quickly," Faulkner recalled. "And then I was down. They put me out. I was in the emergency room. They operated. I was kind of unaware of the severity of the situation, to tell you the truth. My other half, she went through it; they told her what it was. I was only aware when I came to of what it was and how severe it was, and then that's when it became very real and how lucky and fortunate I am. But to be honest with you, with the survival rate, I don't know how I survived to the hospital."

According to Richie, he experienced no symptoms prior to the episode that would have alerted him about what was about to happen. "It was so out of the blue," he said. "There was nothing to suggest that there was anything like that coming. Nothing genetic, nothing hereditary. Go figure, man. [Laughs]"

Richie went on to credit his family and PRIEST fans for providing him with the necessary encouragement and motivation to get through the early days of his recovery.

"I've had the most incredible support system at home," he said. "The fans have been unbelievable. As I said, the surgeons, the doctors, the nurses… My family have been incredible. The fans have been great. They've been supportive. We've had these tours scheduled, like the one we're on now, and they were, like, 'Don't do it.' Some of 'em were, like, 'We can't believe we're saying this, but there's even more important things than JUDAS PRIEST. If you are not ready to come back… Health first.' But having these tour dates scheduled kind of helps the recovery, if you know what I mean. When you've got something to aim for, you can understand that it kind of helps you aim for that and get well, and it seems to help the recovery process. But they've been fantastic, and they've been really compassionate. And the fans have been great."

Last month, Faulkner revealed that he underwent a second heart surgery in early August. He later explained to "That Fuzzing Rock Show": "They found something just before the European leg [of JUDAS PRIEST's world tour]. And it was basically a hole in the repair and there was a leak — I'd basically sprung a leak in there — and it was causing a sack to form around my heart. So they found it just before the European leg. And the surgeon said it was okay for me to do Europe, [so] I was actually touring Europe, playing Europe with this sack and a leak inside there. What that meant was when I got back from Europe, two days later I was back in the hospital for another open-heart surgery. And I've been recovering since then. So, again, the surgeons and the doctors, they were all saying that it was enough recovery time to be able to recover before the next group of dates mid-October… There was a festival in Sacramento [Aftershock] that we had to bow out of, 'cause I wouldn't have been able to do it. I needed that eight or nine weeks recovery time. That's why we had to pull that festival. So, yeah, I'm doing well — feeling strong, feeling healthy. But yeah, it was a bit daunting, to be honest, to be touring Europe knowing that that was going on. But you've gotta put your trust in the doctors, and it worked out okay; I'm recovering."