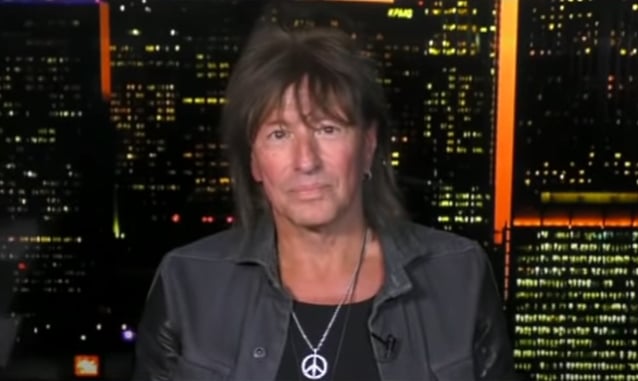 RICHIE SAMBORA Doesn't Rule Out Reunion With BON JOVI: 'It's A Possibility'

Richie Sambora says it's a "possibility" he could reunite with BON JOVI for an appearance at a U.K. festival next year.

The 63-year-old guitarist/vocalist addressed a possible renewed collaboration with his former bandmates while speaking to Metro on the red carpet of The Music Industry Trust Awards at The Grosvenor House Hotel in London on Monday (November 7). Asked about the chances he will get back together with BON JOVI for a headlining performance on the Pyramid Stage at next summer's Glastonbury festival, Sambora said with a "cheeky smile" on his face, "It's a possibility. We're talking a bit."

Two years ago, Sambora opened up about his controversial decision to leave BON JOVI in 2013 in an interview with People magazine, saying that he wanted to spend more time with his daughter Ava, now 25.

"It wasn't a popular decision by any means, obviously, but there was really almost no choice about it. I had a lot of conscious work to do around [my personal life]," the guitarist said.

"We've been through a lot of things together. That was a time of psychological maintenance for the family. You know, I ain't no angel. But I realized, Ava needed me to be around at that point in time. Family had to come first, and that's what happened."

Sambora, who spent time in rehab in 2007 and 2011 for alcohol and prescription drug abuse, added that the rock and roll lifestyle eventually took its toll.

Two months earlier, Sambora told U.K.'s Daily Mail that he wasn't opposed to one day rejoining BON JOVI, provided that the circumstances were right. "It would have to be a special situation for me to go back, but I'm certainly not counting it out," he said. "I have no malice toward that band."

Richie's comments came just a couple of weeks after Jon Bon Jovi told Germany's Rock Antenne that "there's not a day that goes by that I don't wish that Richie had his life together and was still in the band. And yet, in a weird way, it's because of his inability to get it together anymore that we went on and wrote 'This House Is Not For Sale'."

Addressing Jon's remarks directly, Richie told Daily Mail: "When people say I don't have my life together — are you kidding me? I'm the happiest dude on the block."

Sambora, who joined BON JOVI in 1983 and co-wrote most of the group's iconic hits over the following three decades, hasn't performed a full show with the band since he left the "Because We Can" tour seven years ago. He later said he thought BON JOVI "should have made more strides to become a band" and not turn into "Jon being the front guy and nothing else." Jon, in turn, claimed Sambora's "choices" had "led him astray."