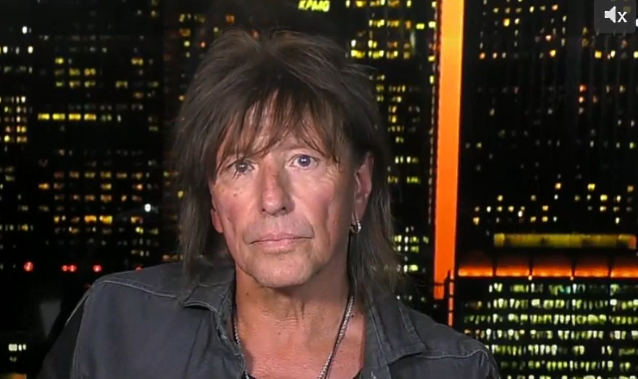 RICHIE SAMBORA On TAYLOR HAWKINS's Death: 'Sometimes The Perils Of Being In The Rock And Roll Business Can Kill You'

Former BON JOVI guitarist Richie Sambora has paid tribute to FOO FIGHTERS drummer Taylor Hawkins, who died more than a week ago at the age of 50. Speaking to Fox News' "Fox & Friends" last Thursday (March 31),he said about Taylor's passing (as transcribed by BLABBERMOUTH.NET): "Oh, man. The FOOs are just a legendary band. It's such a shame, obviously, because sometimes the perils of being in the rock and roll business can kill you. I was a lucky guy that I just didn't like any of that crap that much. But Taylor was a great guy, an amazingly talented man, and they were one of the most successful bands in the world for a very long time. And we'd find ourselves on vacation together, just crossing paths and stuff like that. They were just a bunch of great guys. It's gonna be a loss. You don't even know what to say. It's kind of beyond words, really, because he was such a great guy — and a talent."

Sambora is no stranger to the rock and roll lifestyle. In 2008, he was arrested for DUI with his then-10-year-old daughter Ava in the car. The incident happened only a year after the guitarist had left rehab for alcohol and pill abuse. The arrest followed a year of personal trials during which his divorce to actress Heather Locklear was finalized, his relationship with Denise Richards fell apart and his father died of lung cancer.

"When I fell off that cliff, I realized who I was, unrelated to the band," Sambora told the Los Angeles Times in a 2012 interview. "I'd started to clean up [in 2007], but I slipped, and made those amends. I'm lucky I wasn't a guy who lost his family or relationships… I had cleaned up my act about 85% [in 2007]. But I was naïve. I just wanted to drink as a stress reliever, and I slipped again."