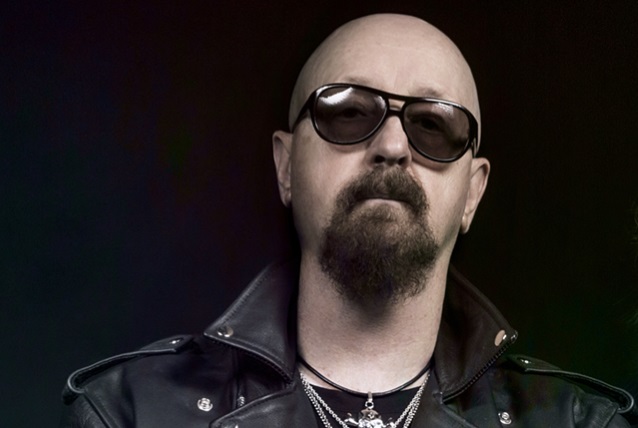 JUDAS PRIEST singer Rob Halford has told the Phoenix New Times that fans can see more collaborations in the future, following his recent involvements with IN THIS MOMENT, BABYMETAL and FIVE FINGER DEATH PUNCH.

"Nergal [from BEHEMOTH] and I are possibly doing a collaboration," Halford said. "I was in the dressing room with Tobias [Forge] from GHOST, and we talked about collaborative opportunities too. It's fun for musicians to step into each other's world. It's like different football teams — it's the same game but a different play. I'm just very curious to see where my voice can fit in."

Halford has long spoken about wanting to work on a black metal album, reveling more than a decade ago that he had discussions with EMPEROR's Ihsahn about doing something together.

Earlier this year, he told Noisey that he still hopes something will happen in the future.

"The black metal project!" he said. "It keeps being about to lift the launchpad, but it never quite gets anywhere. I met Nergal from BEHEMOTH recently, and I said, 'You know I love your kind of music. I would love to kind of put my toe into the water and see what would happen.'

"So now I've got these two very nebulous, but I hope at some point very real opportunities, to do something with Nergal and still something to with Ihsahn.

"'Anthems To The Welkin At Dusk' — that's my big EMPEROR album. Both of them are incredible; they just have this real mastery of their world."

Nergal responded to Halford's comments on Instagram, writing: "Now fuckin' deal with it! With such vibes within the metal community, the future has no fuckin' limits."

Back in 2015, Halford said that he still wanted to collaborate with one of his current favorite artists, pop superstar Lady Gaga. He said: "Let me tell you: that lady is a heavy metal maniac. She loves PRIEST, she loves [IRON] MAIDEN, she loves MOTÖRHEAD — all of these kinds of heavy metal bands that have been roaring on throughout the decades; she's a big fan of all [of them]."

He continued: "When I met her, I think it was in San Diego, where I'm hanging out these days, we immediately bonded. She's just this wonderfully talented lady with a spectacular voice.

"You know, you have to cut through a lot of the visual stuff with Gaga and then get to what her voice is about. For me, as a singer, as a fellow singer, she's absolutely sensational and I would love at some point to do something with her. I don't know if ever that's gonna happen, but it's on my bucket list. I think we've all got a bucket list, and that's on mine."