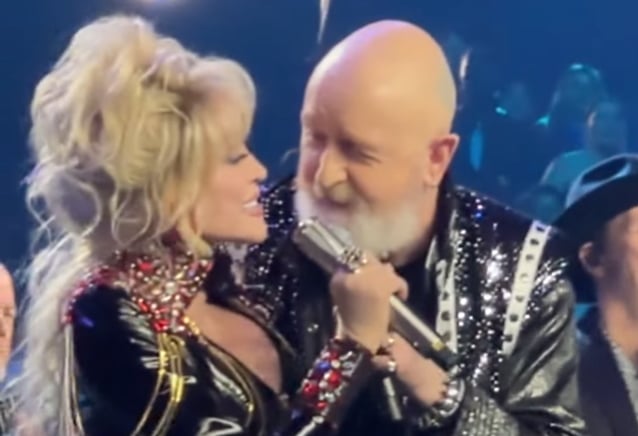 ROB HALFORD On Singing With DOLLY PARTON: 'I Was Just Blessed And Honored And Thrilled'

JUDAS PRIEST singer Rob Halford joined country legend Dolly Parton on stage on November 5 at the Rock And Roll Hall Of Fame induction ceremony to perform her classic song "Jolene". Also appearing with them as part of a "super jam" performance were some of the other Rock Hall inductees, including Pat Benatar, Annie Lennox and DURAN DURAN's Simon Le Bon.

Speaking to the San Antonio Current about what it was like to briefly share the microphone with Dolly, Rob said: "I knew that there was going to be an opportunity a few weeks before the event. Again, it was just kind of floating around that she was going to do this song at the end of the show and bring all of her friends onstage with her. And I didn't realize that we were going to be so connected. I sang one chorus with Dolly Parton and the world's gone nuts. And I can appreciate that now. I didn't understand it at first. And now these days have gone by, and people are going, 'Where's the album with Dolly and The Metal God?'

"I'll tell you something about her: she's been here forever, a bit like Her Majesty the Queen, who left us recently. What I mean by that is when Dolly walks into the room, you feel this regal presence. She's just got this aura about her personality. She's a genuinely beautiful light of love and caring and philanthropy and humanity. It's all real, man. It's all very real. There are some people who are very different on and off stage. Well, no, not with Dolly. That's Dolly's thing. So, for me to have that opportunity, I was just blessed and honored and thrilled. I know her work because I've lived as long as Dolly, and I was aware of Dolly as a young person growing up and seeing her on British television. She'd come over and do these British variety shows. And here I am, this kid from a public housing estate in the West Midlands in England, and I'm standing next to Dolly fucking Parton, who is now a rock chick."

Back in February, when PRIEST's third nomination for the Rock And Roll Hall Of Fame was announced, Halford told Billboard that, "I must do a duet with Dolly Parton! … If Lionel [Richie] and PRIEST get in, I think we'll both be dancing on the ceiling together."

Halford had previously revealed he is a huge fan of Dolly, and had planned to take a photo with her at the ceremony.

"I'm going to force her to, even if she doesn't know who I am," he told Metal Crypt in June. "I'm going to see what table she is sitting at. I'm just going to run to the table and do the devil's horns thing. Tongue out, horns up, behind Dolly Parton's head. It's the only way to do it. I can't smile sweetly. I've got to stick my tongue out and my horns up."

Halford told Rolling Stone earlier in the year that he had no issues with Dolly being inducted into the Rock Hall.

"If you look at everyone in the Hall, it makes perfect sense to have Dolly Parton in there," he said. "I think it's just this 'rock and roll' thing. Should it be called the Music Hall Of Fame? I don't know. It started out with rock and roll, and roll and roll is everything and anything. It's just a phraseology."

Rob also talked about the possibility of sharing the stage with Dolly at the end of the night, saying: "I was onstage last weekend with Larry The Cable Guy! [Laughs] It was at Alice Cooper's blast for his great institution the Solid Rock Foundation. If I could stand alongside my buddy Larry and sing 'roll, baby, roll' [from THE DOORS' 'Roadhouse Blues'], I can certainly stand next to Dolly Parton on my left and Lionel Richie on my right."

Earlier in the evening, Halford, Hill, Tipton and Travis were joined by Binks, Downing and current guitarist Richie Faulkner for three-song medley consisting of "You've Got Another Thing Comin'", "Breaking The Law" and "Living After Midnight".