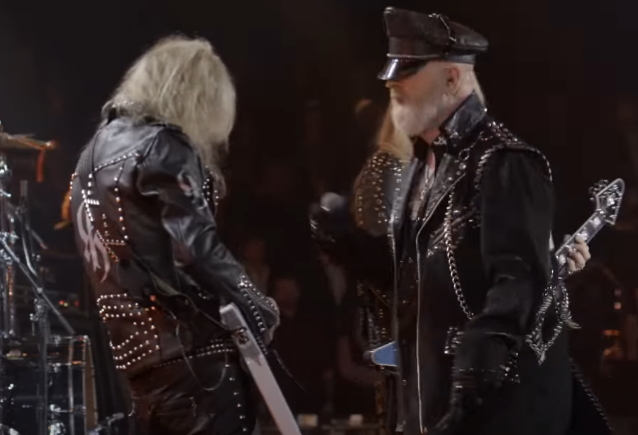 ROB HALFORD Says It Was 'Magical' Performing With K.K. DOWNING At ROCK AND ROLL HALL OF FAME

In a new interview with Lauren "Lern" Elwell of the KSHE radio station, JUDAS PRIEST singer Rob Halford was asked what it was like performing with former PRIEST members K.K. Downing and Les Binks at the Rock And Roll Hall Of Fame induction ceremony on November 5 at the Microsoft Theater in Los Angeles. He said (as transcribed by BLABBERMOUTH.NET): "It was good. We hadn't seen [Downing] forever. And I've still yet to watch footage of that. All I remember is my brief interactions with K.K., because I'm always running around the stage like a mad drag queen. My interactions with Ken and with Les, it was great. It felt wonderful to have that moment together after such a long time. And that just shows you the power, the weight, the vibe that the Rock Hall suggests you try to attempt. Try and recapture something of the essence that it really part of why you're here, why you're being inducted. I was just so happy that Ken and Les showed up, because they needed to be there. It was entirely their choice, but I said it makes absolute sense if you're in the room and we're playing together. And we did, and it was magical."

Rob told KSHE that he "didn't have a clue" what he was going to say in his speech. "Everybody said, 'Have you written a speech?' 'Oh, I've got it,'" he said. "And then I'm watching all this extraordinary talent go up and there and receive their Rock And Roll Hall Of Fame award. And I'd been speaking to [DURAN DURAN's] Simon [Le Bon]. I said, 'What are you gonna say, Simon?' He goes, 'I've got a few ideas.' 'What are you gonna say?' 'Oh, I've got a speech.' [And I was thinking], 'I don't have a speech.' And so when the moment came… And I think this is just me, who I am. I just like to riff. Like we're talking now, it's all real; it's not planned; it's not rehearsed. Which is not a snipe at speeches, because speeches are important — so you don't forget people.

"I still haven't seen what I've said, but I walked up to the podium and I said, 'Everybody, do your bit first,' because I'm notorious for flapping my lips for extraordinary periods of time," he continued. "I said, 'So, everybody, do your bit, and whatever time we've got left, I'll go up and say 'thank you.'' So everybody spoke, and then it was me. And I walked up to the mic, and the first thing that came out of my mouth, I think, was, 'Hi, everybody, I'm the gay guy in the group.' I don't know why I said that; it wasn't planned. It was just in my mind. But what we saw was this beautiful reaction from everybody in the room, and that just instantly threw me into this acceptance thing. All these people, they're not all metalheads, but what I've just said, as a gay guy in metal, and the way it was received, shows you the inclusiveness of what we are in heavy metal, in our heavy metal community. So then I said this, and I said that and something else, and then I just stopped speaking. And that was that.

"But, yes, it was a beautiful night," Halford added. "It was so great. Everybody was so kind and gracious. It was something that'll live with me forever."

The 2022 Rock Hall induction ceremony will air on November 19 on HBO and stream on HBO Max.