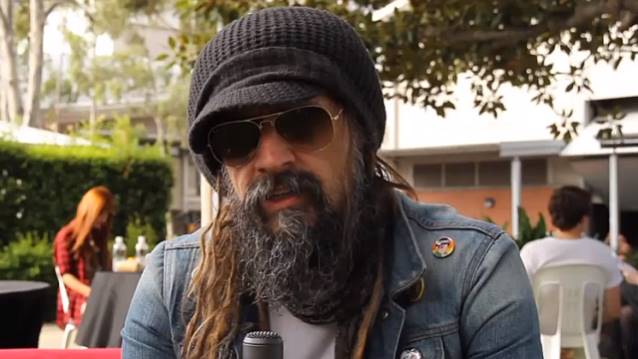 During this year's Soundwave festival in Australia, Metal Hammer editor Alexander Milas conducted an interview with Rob Zombie for the "Metal Hammer" radio show on TeamRock Radio. You can listen to the chat using the SoundCloud player below.

According to The Pulse Of Radio, Rob Zombie has set May 20 as the release date for his new concert DVD and Blu-ray, titled "The Zombie Horror Picture Show". A photo book by photographer Rob Fenn will be published as a companion piece to the home video release. "The Zombie Horror Picture Show" will feature footage filmed during stops on last year's Rockstar Energy Mayhem Festival tour in Houston on August 3, 2013 and Dallas on August 4.

In addition to tracks from his solo albums, the 16-song will include live versions of the WHITE ZOMBIE hits "Thunderkiss '65", "More Human Than Human" and "Supercharger Heaven", along with Zombie's recent cover of GRAND FUNK RAILROAD's "We're An American Band".

This will be Zombie's first official concert DVD release.