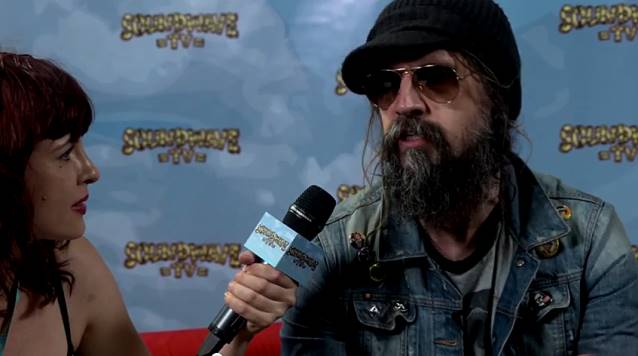 Heavy music presenter Christina Rowatt of Soundwave TV conducted an interview with Rob Zombie on Saturday, February 22 at the Brisbane stop of this year's Soundwave festival in Australia. You can now watch the chat below.

According to The Pulse Of Radio, Rob Zombie has revealed that he has scrapped his plan to make a hockey movie called "Broad Street Bullies" in favor of another movie in the genre he's most associated with, horror. Zombie told New Zealand's 3 News that despite working on his sports film for nearly two years, he suddenly came up with a new idea for a horror movie that his producers loved and immediately wanted to set up. Zombie explained, "That turned into a weird bidding war and that became the next film."

"Broad Street Bullies" was going to be about the Philadelphia Flyers hockey team of the 1970s that were famous for beating the Soviet Union's team at the time and notorious for their violent tactics on the ice.

Zombie did not divulge any details of the new movie's plot, but hinted that it may be in the same vein as one of his earlier films, the fan favorite "The Devil's Rejects". He said, "I think it's something fans of the other stuff will like. Probably fans of 'The Devil's Rejects' will enjoy (it) the most. It's not connected to that film, but it's more on that headspace."

Zombie's last film, "The Lords Of Salem", came out last year in limited theatrical release before heading to home video.

Zombie will kick off a 12-date run of shows on April 26 in Fort Myers, Florida at the Fort Rock festival, mixing other major rock festival stops with headlining shows before wrapping up on May 10 in Camden, New Jersey.