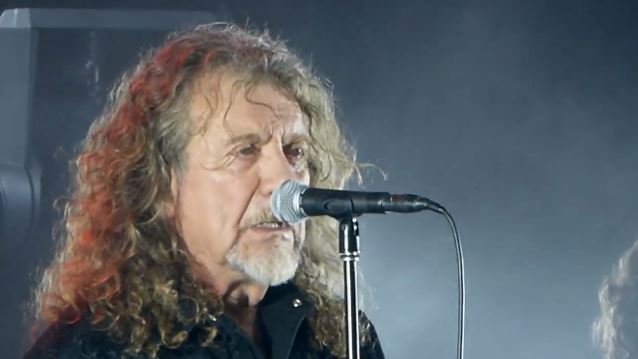 ROBERT PLANT & SENSATIONAL SPACE SHIFTERS kick off their 2017 dates on Thursday night (November 16) in Plymouth, England. According to The Pulse Of Radio, Plant, who's riding high on the success of his newly released Top 20 album "Carry Fire", spoke frankly about the new songs, telling "PBS NewsHour": "Well, there's a lot of preparation and there's a lot of, I guess you would probably call it soul-searching to make sure, with time being so precious, that it's not a wasted journey... it's bridled. It's contained more. It's a good place to go, and it's a bit of a surprise."

December 10 will mark a decade since LED ZEPPELIN's 2007 one-off reunion concert in London. Plant reflected on the glory days of the band when they barnstormed their way across the globe. "Those bands in those days, y'know, barely out of my teens, and the guys I was playing with were the most amazing players," he said. "And it was all about energy, all about expression, garish sometimes. In that environment then, everything was so exaggerated, but it lasted just as long as it lasted. And then it — for me, it just dissolved."

He went on to explain that there was not formal planning behind ground that LED ZEPPELIN broke throughout the 1970s. "We didn't know what on Earth we were doing," he said. "We were just doing gigs, and the gigs got bigger, and the crowds got bigger, and we had more fun. To be the guy up at the sharp end, what I call it, as a singer, was a bit of a labor, was a bit of a toil... I don't wear a girl's blouse anymore, but I'm still desperately switched on to the music that surrounds me. So, with ZEPPELIN, I think I was just playing it out. Interesting to see now. I just wonder how he felt at the end of the night, that guy, when I look at him."

"Carry Fire" was released on October 13 via Nonesuch/Warner. The follow-up to 2014's "Lullaby And… The Ceaseless Roar" was produced by Plant in the west of England and Wales, at Top Cat studio in Box, Wiltshire with additional recordings at Real World and Rockfield studios.