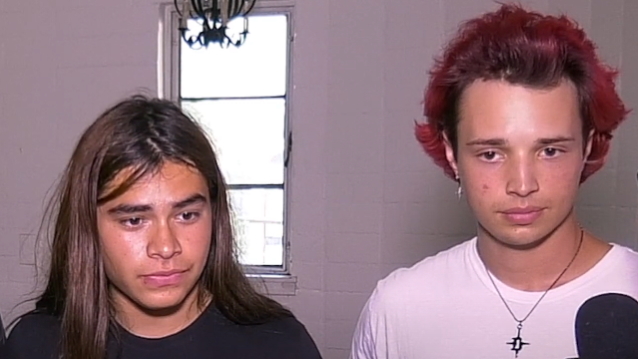 BLU WEEKEND, the new band featuring the sons of Scott Weiland and Robert Trujillo, made its live debut this past Sunday (June 27) at the iHollywood Film Fest after-party at Woman's Club Of Hollywood.

Prior to the performance, Tye was asked by "The Blairing Out With Eric Blair Show"how BLU WEEKEND's sound differs from that of SUSPECT208. He said: "I guess we have more of a punk vibe. What we're gonna play tonight is gonna be more of a punk vibe to it. 'Cause we're gonna play a song [called] 'Shark Attack', playing one of Noah's old songs. So it should be pretty fun."

When he was just 12 years old, Tye filled in for bassist Reginald "Fieldy" Arvizu for KORN's South American tour after Fieldy was unable to make the shows due to "unforeseen circumstances." Asked if he is open to playing with KORN now that Fieldy is once again sitting out the band's upcoming tour, Tye said: "I'm ready. I know the songs from a while back, so I have my experience playing. If they're interested, I'm obviously more than down to go play with them."

Tye, who has also previously played live with SUICIDAL TENDENCIES, told Australia's Wall Of Sound last year that he listens to "varieties of different types of music. Sometimes I'll be listening to BAD BRAINS or SLAYER, all the way to modern hip-hop," he revealed. "I like to take influence from each genre I listen to."

When some fans and journalists drew parallels between the sound of SUSPECT208's debut single, "Long Awaited", and that of Noah and London's fathers' band VELVET REVOLVER, Noah told the "Appetite For Distortion" podcast that the musical similarities were unintentional. "I didn't try to do that or anything," he said. "I don't write songs; I just come up with it on the spot. I hear an instrumental or something for, like, 30 seconds to a minute, stop it, instantly put it in and just start recording it by myself. And as I go along, I just start coming up with different things. I wasn't trying to sound like anything. My voice could sound completely different, which it does in most [other songs]. That's a very small part of my voice, that song."