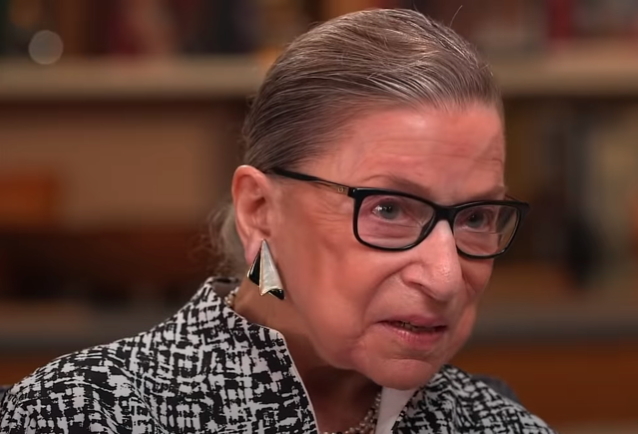 PEARL JAM, Charlie Benante (ANTHRAX),Todd La Torre (QUEENSRŸCHE),Alex Skolnick (TESTAMENT),Jay Jay French (TWISTED SISTER) and Vernon Reid (LIVING COLOUR) are among the rockers who have reacted on social media to the passing of Supreme Court Justice Ruth Bader Ginsburg, who died on Friday due to complications of metastatic pancreas cancer. She was 87.

Ginsburg graduated from Columbia Law School, going on to become a staunch courtroom advocate for the fair treatment of women and working with the ACLU's Women's Rights Project. She was appointed by President Jimmy Carter to the U.S. Court of Appeals in 1980 and appointed to the Supreme Court by President Bill Clinton in 1993.

The justice, who sat on the bench for 27 years, was the second woman confirmed to the top court.

Supreme Court justices serve for life or until they choose to retire, and supporters have expressed concern that a more conservative judge might replace her while President Donald Trump, a Republican, remains in office.

Earlier today, Senate Majority Leader Mitch McConnell said that he will hold a vote on Trump's nominee to fill the vacancy left by the passing of Ginsburg on the Supreme Court despite the fact that, in the days before she died, Ginsburg reportedly told her granddaughter that it was her wish that she not be replaced before Inauguration Day.

"My most fervent wish is that I will not be replaced until a new president is installed," Ginsburg reportedly said.

McConnell blocked former President Obama's Supreme Court pick from receiving a confirmation hearing after Justice Antonin Scalia died in 2016, the year of the last presidential election. At the time, he and other GOP lawmakers maintained that a Supreme Court vacancy should not be filled the same year as a presidential race.

A life that was the very definition of service.

May she rest now in peace and may we not rest until we have carried her legacy forward. #RBG

As horrific as the #TheRealDonaldJTrump presidency has been, the death of our jurist giant #ruthbaderginsberg may have allowed this fascist to advance his #americanhitler agenda even further

Thank you Ruth Bader Ginsburg. Our children will know what you did. RIP RBG. https://t.co/FgVBcJ7kIi

#RIPRGB .... very sad to hear this . I didn’t expect this today. #vulturescomingpic.twitter.com/sM2kR01msJ

That is how Our Ruth fought so hard so long. She was MIRACULOUS . This is how we will her the honor, Her Honor so richly deserves- to NOT give in to the comfort of despair. The other side is counting on apathy & resignation. We have to deny them that pleasure even as we HURT. https://t.co/kZcR3k1XU6

The notorious RBG Rest In Peace. Thank you for making the world a better place. 😢 https://t.co/xovePwroft

She did so much for equal rights for all... RIP https://t.co/Uzjla5lut8

RIP Ruth Bader Ginsburg. You are forever a legend.

If you're suddenly energized / excited about the tragedy/victory that just fell in your lap..Bad News: You are everything the God of the Bible hates and have no place in heaven. GOOD NEWS: there is no God and you're only hated by actual good people. Enjoy 2020 #justdiepic.twitter.com/R1JYS2Or7N

LGBTQ rights including marriage equality, Roe v Wade, the 14th amendment & our very democracy is at stake. The ballot is our only weapon. Nov 3rd - make it count.

Thank you & rest in power #RBG

Rest In Peace and condolences to her family and admirers.

Posted @withregram • @chantalclaret Took a hiatus from my hiatus to show some love for the incredible RBG. Who dictated to her granddaughter right before she passed away “My most fervent wish is that I will not be replaced until a new president is installed.”