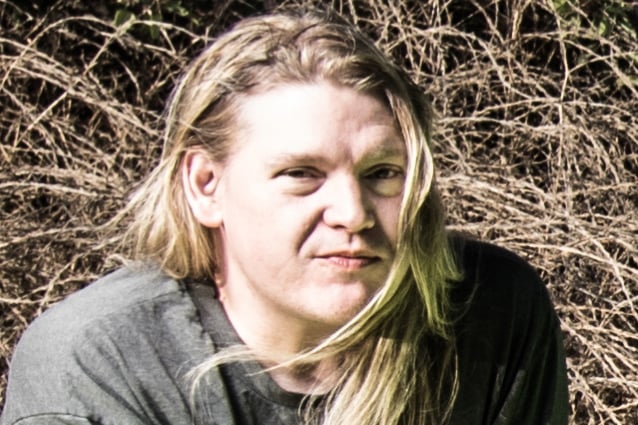 Reed's bandmates confirmed his passing in a social media post Monday night (January 27). They wrote: "Reed, It's with heavy hearts that we say goodbye to a friend, a brother and pioneer. Love and condolences to the family, friends and fans who will miss you and thanks for the music"

Mullin was also involved in a number of side projects, including MAN WILL DESTROY HIMSELF, NO LABELS and BROWN. He was a member of the supergroup TEENAGE TIME KILLERS, featuring contributions from FOO FIGHTERS' Dave Grohl, SLIPKNOT's Corey Taylor and LAMB OF GOD's Randy Blythe, among others.

CORROSION OF CONFORMITY's latest album, 2018's "No Cross No Crown", marked the band's first studio output with vocalist/guitarist Pepper Keenan in over a decade.

Very sad about Reed. SUPER nice guy, fantastic drummer. MH toured with C.O.C. back in 97 and he was great dude to hang with. Their album Animosity and especially the song “Loss For Words” blew my mind back in the day. Blind will be in heavy rotation tmro. Rest In Peace pic.twitter.com/9WfEveYL0f

So sad to hear about the passing of Reed Mullin of COC. I was blown away by early COC albums like “Eye For An Eye” and “Animosity” but my whole musical world changed when I heard “Blind”. So many incredible riffs,… https://t.co/lsh3IRulOq

Rest in Peace Reed. Legendary underground music drummer of the 80’s US hardcore scene. As his band @coccabal crossed over into Metal/Rock (and then back into punk!) he was always crushing it behind the drums. One of the friendliest dudes too. This sucks :/ #reedmullin#coc#riphttps://t.co/16DKg8B0n9

I JUST FOUND OUT WILLIAM REED MULLIN OF CORROSION OF CONFORMITY HAS PASSED AWAY.I PLAYED WITH HIM A FEW YEARS AGO IN EUROPE. ALWAYS CAUGHT COC WHEN THEY PLAYED NYC.DUDE WAS A GREAT UNORTHODOX DRUMMER & A NICE GUY. A TRUE HARDCORE PUNK LEGEND. REST IN PEACE!!!

R.I.P. Reed Mullin from Corrosion Of Conformity!!!!!!! We got to do a few tours opening up for them and he was always ultra cool to us!!!!! That 1997 tour we did with them, they were sooo heavy live!!! Even back in… https://t.co/rFopqDkteX

Very sad to hear about the passing of our friend @ReedMullin of @coccabal . Prayers and condolences to his family, friends and bandmates....RIP.

I met Reed Mullin only once when COC cruised through Toronto in 1990. Even that brief meeting was memorable & I got a pretty sweet story out of it (that has to do with this exact photo). Always thought COC were the coolest band on the scene and Reed the coolest. RIP Reed Mullin pic.twitter.com/O7ZgGb8T5d

R.I.P Reed Mullin. Our thoughts and condolences go out his friends, family and all associates of coccabal https://t.co/yFcrqdZPEi

Reed Mullin
Rest in peace my brother
So sad..... #corrosionofconformity#reedmullin#riphttps://t.co/jPC8gBjlYz

Damn! So sad to hear about my ol pal Reed Mullin. Rest in peace my friend. You go girl!

What an amazing drummer. He was definitely an influence and had a huge impact on myself and so many others. I remember...

This one hurts. R.I.P. Reed... We had known each other for a long time. Always loved watching you play. And always a...

Reed was easy to love. Everybody loved him. He was a great human, a great drummer and a great friend. He had a way of...

I’m so saddened to hear about #reedmullin . I think back to the days of meeting him and getting to know this person that had a glow around him . I’ll never forget the time he lost one of his shoes in the pit at one of our shows. He came backstage with one shoe on like it was nothing, he just rolled with it. I always loved his style of drumming too, just listen to Loss for word off of Animosity, great drummer. He will be missed 💜@coccabal

I got the sad news last night that my friend Reed Mullin passed away. Reed was the drummer for one of my all-time favorite bands, Corrosion of Conformity, & he is also one of the reasons I am a singer in a band today. Back in 1985, C.O.C. put out their ground-breaking hardcore crossover record, “Animosity” & from the first time I heard it I loved it- I wore that freaking tape out. My favorite track on that album is one Reed sang, “Hungry Child.” One day I was going skateboarding with some older dudes in Wilmington, NC (I was around 15 years old at the time) & we were in a car driving to the spot- someone threw “Animosity” into the cassette deck. When “Hungry Child” came on, I started singing along. The driver turned around & said “Damn, kid- you can actually sing like that. You should be in a band one day.” That was the first time anyone had ever told me that, I never forgot it, & I never will. If you listen to the way I scream at times, & you listen to “Hungry Child” you’ll hear Reed in my delivery. I told Reed that story many years later, after we had become friends, & he was super stoked. Reed was an O.G. punk rocker from the American South, a place where it wasn’t easy to be different in back in the day. He booked shows for other bands who came through Raleigh, NC, & was super important to the development of the hardcore scene in general. I met him for the first time in an airport when he came up to me & said “Nice shirt!” (I was wearing a C.O.C. one)- we became friends, I got to interview him for my radio show, & I even sang in his super group, Teenage Time Killers. Once in the 80’s my brother & I went to go see C.O.C.- my brother didn’t have enough money to buy a t-shirt, so Reed (who was selling merch after the gig) traded him one for the Black Flag t-shirt he was wearing- that’s the kinda dude he was. Reed also played at the hands-down greatest gig I ever saw- Bad Brains, C.O.C., & Leeway in VA Beach in the 80’s. I took this photo when my band took out C.O.C. on tour- we played freaking Red Rocks on that run- not too shabby for two dirt bag punk rockers from the South. Rest In Peace, Reed- you’re a legend & an influence & I’ll miss ya, bro.

So sad to hear the news of Reed Mullin. That’s just not fair. Such an amazing talent to have initially come from the hardcore scene. I remember seeing him wearing a white Trouble t-shirt in Maximum Rock n Roll and wanted to know who that band was. I met him many times, mainly when Cathedral and COC were staying at the Columbia hotel at the same time during the 90’s, which seemed like every week to be honest! One of the funniest was visiting them at Electric Ladyland studios in the middle of the night, whilst they were mixing. I was completely off my trolley. We played with them on several occasions during the early 90s, which was always a pleasure and a great time. Every other year he would send an email, checking in to ask how I was doing. I probably have some personal photos but don’t have them to hand right now. RIP mate and condolences to your family, friends and former band mates.