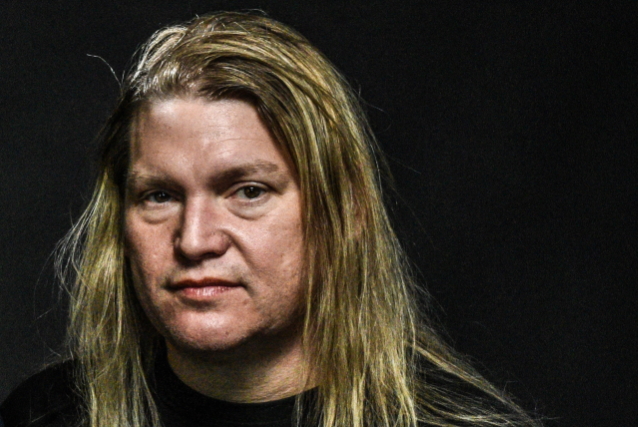 CORROSION OF CONFORMITY drummer Reed Mullin has died. He was 53 years old.

His bandmates confirmed his passing in a social media post earlier tonight. They wrote: "Reed, It's with heavy hearts that we say goodbye to a friend, a brother and pioneer. Love and condolences to the family, friends and fans who will miss you and thanks for the music"

Last summer, Dean said that Mullin needed "to take care of himself and get his shit together" before rejoining the band. "And if that happens, the door's open for him," Mike told the "Talk Toomey" podcast. "And if it doesn't, well, that's how it is. People need to wanna help themselves. You can't just push them to get help — they've gotta wanna help themselves."

Mike also praised Mullin's replacement, John Green from Manchester, U.K., who had previously worked with CORROSION OF CONFORMITY as a roadie.

"Reed had some sort of incident where, basically, just a few hours before getting on a plane to play Bloodstock [festival] a few years ago, I heard that he wasn't gonna be able to make the trip," Dean explained. "And as I was calling the tour manager in the U.K. to say, 'Hey, we're not gonna be able to make it,' he said, 'You know, John could learn all those songs.' And I thought about the idea of just pulling the plug on this whole thing we worked hard to do, and I said, 'You know what? Let's try that.' And he stepped up with 24 hours notice — slightly less than 24 hours notice — learned a bunch stuff, studied up and just went out there in front of basically 60,000 people who were there to see JUDAS PRIEST, et cetera, et cetera, and just nailed it, with energy and all that. So, it was, like, 'Well, this seems to be the way to go.'"

When Mullin suffered his alcohol-related seizure four years ago, Dean said in a statement that the episode had been "preceded by prolonged, extreme and unhealthy levels of alcohol consumption, not taking care of himself and who knows what else." Dean revealed that the "tragic event" echoed "a nearly identical" incident in Pittsburgh a few years earlier, where "Reed had a seizure just before taking the stage when the three-piece version of the band were also opening for CLUTCH. Both instances were preceded by concerns about Reed's well being and appearance. That incident resulted in five canceled shows. So years of assurances go by and we come full circle back to the same avoidable tragedy."

Mike went on to say that he and his bandmates would "not enable Reed to continue killing himself on our watch."

In a December 2015 interview with SideStage Magazine, Mullin reflected on the passing of former STONE TEMPLE PILOTS singer Scott Weiland, who had just died of an accidental overdose of alcohol and drugs. He said: "I think a lot of people thought that it would have happened a long time ago. I didn't really know Scott, but I was really good friends with Layne Staley [ALICE IN CHAINS], and I've had my own problems with alcohol, you know; I think a lot of us have. But, you know, you have housewives that get addicted to pain pills and stuff like that. So it's not hard to understand, but at the same time it's tragic, especially in Layne's case when you knew it was going to happen. I didn't know Scott that well at all — I had met him several times, but I didn't really know him. I knew Layne very well. Like I said, I didn't know Scott, but I share a lot of the difficulties that he had before he passed so I understand, and I still struggle with some of that stuff."

CORROSION OF CONFORMITY's latest album, 2018's "No Cross No Crown", marked the band's first studio output with vocalist/guitarist Pepper Keenan in over a decade.

Reed, It’s with heavy hearts that we say goodbye to a friend, a brother and pioneer.
Love and condolences to the family, friends and fans who will miss you and thanks for the music

Posted by Corrosion Of Conformity on Monday, January 27, 2020

I just heard one of my oldest friends in the music scene has passed. I am devastated what a amazing and sweet individual he was.

Deeply saddened to hear that Reed Mullin has slipped away from us. Reed was a monster talent and a huge figure in the...

Just got terrible news about my old friend Reed Mullin. We hadn't really seen each other in a while, but he had just...