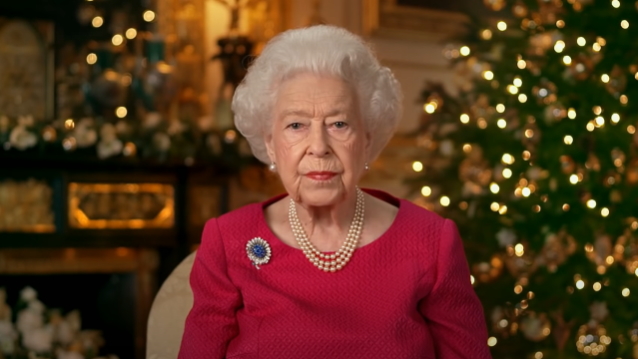 Members of BLACK SABBATH, SAXON, DEF LEPPARD, STRYPER and THE OFFSPRING are among the musicians who have reacted on social media to the the passing of Queen Elizabeth II, the longest reigning monarch in British history, who died today at 96 years old.

"The Queen died peacefully at Balmoral this afternoon," Buckingham Palace confirmed in a statement released today. "The King and The Queen Consort will remain at Balmoral this evening and will return to London tomorrow."

Buckingham Palace released a statement today from His Majesty The King, in which he reflected on the passing of his mother.

"The death of my beloved Mother, Her Majesty The Queen, is a moment of the greatest sadness for me and all members of my family," King Charles said. "We mourn profoundly the passing of a cherished Sovereign and a much-loved Mother. I know her loss will be deeply felt throughout the country, the Realms, and the Commonwealth, and by countless people around the world."

He added, "During this period of mourning and change, my family and I will be comforted and sustained by our knowledge of the respect and deep affection in which The Queen was so widely held."

Shortly after her death was announced, the Duke and Duchess of Sussex shared a tribute to the queen on the web site for their foundation, Archewell. The landing page of the site changed to a simple black background with small white text that read, "In loving memory of Her Majesty Queen Elizabeth II 1926-2022."

I mourn with my country the passing of our greatest Queen. With a heavy heart I say it is devastating the thought of England without Queen Elizabeth II pic.twitter.com/JZYXGRz2hb

Sad to hear of The Queen passing. I remember the street celebrations when she was crowned Queen. Always a staple of growing up in England. GSTQ- RIP pic.twitter.com/TEROdsZvGk

Cant help but think of Dads painting on this day. Hope the painting is still in good condition. RIP #QueenElizabeth a leader who brought the whole world together 🙏 https://t.co/KDD5a1cYSa

"She has transcended eras with good grace and service to her country that is unparalleled anywhere or by anyone. Thank you your Majesty for a lifetime of great memories and leadership."

My sincere condolences to @clydetombaugh & all those who loved her. #QueenElizabeth

Send her victorious
Happy and glorious

We mourn the passing of our beloved Queen.
RIP Your Majesty.

For my whole life Her Majesty, Queen Elizabeth II has always been there. In my childhood I can recall watching her wedding highlights on TV. I remember her as a beautiful young lady, to the much beloved grandmother of the nation. My deepest sympathies are with the Royal family. pic.twitter.com/3JLILZDKwK

The Rolling Stones extend their deepest sympathy to the Royal family on the death of Her Majesty, Queen Elizabeth II, who was a constant presence in their lives as in countless others. pic.twitter.com/veCyfN8rjp

I was so proud to perform for Queen Elizabeth II at Buckingham Palace for her Platinum Jubilee only a few months ago. May you rest in peace. pic.twitter.com/cmfZ2cgnsS

Queen Elizabeth was the ultimate example of service and duty… today is a sad day. pic.twitter.com/1yS7RpNeCp

My thoughts are of the Queen on this very sad day.

The Queen passing today made me think of my mum @Official_Joan Joan Broad who passed 2 years ago, both born of the same era & lived their lives with cool, dignity & grace…

Heartbroken about the loss of the Queen. Our deepest condolences to her family and all British citizens

A wonderful photo by Annie Lebowitz I must say. This is a sombre day. Growing up with the Queen and always having her as apart of our lives, and now she is gone is an awful feeling. She loved her Corgis as do I. RIP to the Queen. A well deserved rest indeed. What a life she lived pic.twitter.com/ecWn0u6lY0