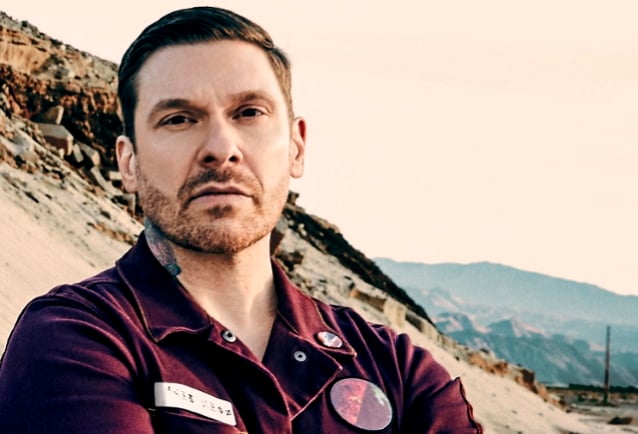 SHINEDOWN's BRENT SMITH: 'I Don't Believe That Freedom Of Speech Should Be Stifled'

During a recent chat with Jaxon of the 93.3 WMMR radio station in Philadelphia, Pennsylvania, SHINEDOWN singer Brent Smith spoke about the lyrical inspiration for the band's new album, "Planet Zero". He said (as transcribed by BLABBERMOUTH.NET): "Part of 'Planet Zero' and what's inside of this record is there's a lot of warnings on this album of what could potentially happen and what the future could be. There's an element inside of the record of how close of AI does the human race really need to be concerned with, because the dynamic of social media and having these devices can be extraordinary and they can be used as great tools — they can be. They can also be used to be quite devastating and quite destructive. So there's a balance inside of all of this."

He continued: "I've often told people you have to be able to make your own decisions through educating yourself and also common sense and really looking at the big picture. The device does not need to be in control of you; you need to be in control of the device. They forget that sometimes, man, because the world is moving so fast and it's an instant level of gratification through these endorphins that are firing off and the lack of an attention span, in a lot of ways, that people have now because they're used to a different kind of way of interacting with each other.

"I've been talking about mental health for the better part of 20 years — even before there were articles written about it and papers and studies that have been [conducted]… It's good that it's being brought to the forefront, but everybody's different and everybody has a different way with how they handle themselves and their livelihood and how they navigate this planet.

"I want people to understand that there's always gonna be a balance in anything you do and you're not always going to agree with everybody, but you should be able to have a constructive conversation, because I don't believe in censorship and I don't believe that freedom of speech should be stifled," Smith added. "I wanna know what you think, I wanna know where you're coming from, because I want you to teach me something, and maybe I can teach you something, but you have to have a dialogue with each other.

"Watching what occurred in the last two years, but also seeing how quickly — once we understood the virus, once we understood what was really going on, people were so ready to come back together. People weren't testing the waters; it was, like, 'No, no, no. I want my life back. I want to be able to be around people again.'

"So, questioning authority is a topic on this record, not losing your empathy for your fellow man, woman, child and just everybody on this planet," Brent said. "You've gotta remember, man, we all come from different walks of life, but I still believe in human beings and I still believe that human beings are inherently good and that we do wanna take care of each other.

Two weeks ago, SHINEDOWN released a brand-new Amazon Original of the band's current hit single "Daylight", available now only on Amazon Music. The track is a complete re-imagining of the song that changes up the chord progression and tempo and injects big drums and an aggressive distorted synth guitar tone that balance against the beauty and softness of the verses and chorus.

"Planet Zero", produced by SHINEDOWN bassist Eric Bass, is out now via Atlantic Records. The album debuted in the Top 5 on the Billboard 200 chart and the official U.K. albums chart, and at No. 1 on six other Billboard charts, including Top Album Sales, Rock, Hard Rock and Alternative Albums.