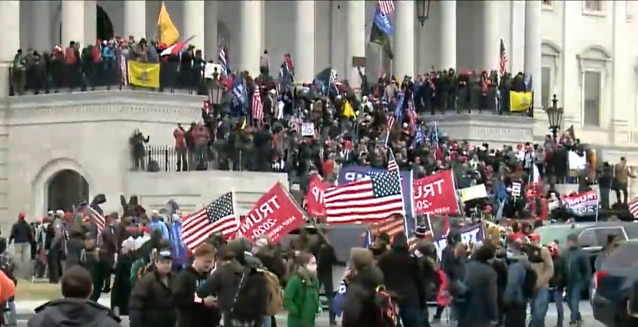 Hundreds of pro-Trump protesters broke through barricades and swarmed the building, forcing the Senate to evacuate and Vice President Mike Pence to be moved to a secure location.

Earlier in the day, Trump — who has refused to accept the results of the election and has baselessly asserted that the election results were fraudulent — encouraged thousands of his supporters to march to the Capitol to protest the confirmation of Biden's victory. He later returned to the White House, despite telling the crowd he would join them in the march to the Capitol.

Skolnick, who has been vocal about his distaste for America's 45th president, took to Twitter to share a video of the protests, and he wrote: "Ok, the US Capital is in lockdown. Angry, Anarchist mob worse than what they say Antifa is. Lafayette Square was ruthlessly swept by authorities in an instant for a Bible photo op yet these people are able to swarm here?? Where is the military? The National Guard? #capital #coup"

He continued: "This is next level insanity. So you can just breach our Capital? What message does this send to our adversaries? If someone was sent to destroy America, you could not find a better enabler than @realDonaldTrump".

Trump has repeatedly claimed that the election was stolen. But he has been unsuccessful in his legal efforts to convince American judges across the nation to nullify millions of votes in six key states and declare him the winner of the 2020 presidential election.

No evidence has been provided for any of his allegations, and dozens of federal courts, with both Democratic and Republican judges, have dismissed lawsuits which referred to those claims.

The presidential race ended with a victory for Biden with 306 electoral votes. Biden had received 81 million votes across America — the most votes cast for any presidential candidate in history — compared to 74 million votes for Trump.

These are TERRORISTS. This is armed insurrection. The flames were fanned today & over time by the president & specific senators who CANNOT be allowed now to distance from or denounce what they have directly caused. Know their names. THIS is the result of their deception. Shame. pic.twitter.com/nDJhvV3b1c

hey Fuckhead @realDonaldTrump tell you covidiots to go home...its a wrap, ya'll lost, GTFOH!! and while you're at it YOU get the fuck outta here too before people get seriously hurt!

When fear & hate are encouraged to assimilate steadily into the cultural zeitgeist the is ultimate result. Absolutely heart breaking & embarrassing. I see nothing patriotic or decent in the support of this idiotic, dangerous & asinine behavior. We must find a way to unite & heal

spare me that right of the people bullshit we all know that if it was a Black or Hispanic storming the capital breaking windows and destroying property it would be a bloody mess. Because these are Trump supporters and not of color police are doing nothing. https://t.co/qVbzMhNIFw

That’s devastating I don’t encourage violence at all but Trump is part of the reason she got shot. Raising millions of dollars on his lies. https://t.co/D3gcOie7KE

I never said he said that, but he definitely knows how to manipulate his base and encourage them to take matters into their own hands based off conspiracy theory lies that he tweets. He does not condemn his base. https://t.co/0kU2ltkIjk

You know he’s watching and loving all this.He has so much control over his supporters, so much control that he can get them to believe his lies and storm & vandalize the capital building based on a conspiracy theory he tweets, and to take millions of your dollars in donations.

They’re putting one man above the country. That’s how “patriotic” these people actually are. They are traitors & should be held accountable for their actions. The fact that they are cultists & idiots is no excuse. https://t.co/XM4aNiTkah

When BLM protestors were marching on the confederate monuments here in Richmond, they were getting beaten with batons & tear gassed.
These dudes are literally being allowed to CLIMB the Capitol building lol

Pretty much sums it all up. https://t.co/BiF1YUqVp7

These “protestors” should break into a CVS and then maybe the national guard will show up.

Ok, the US Capital is in lockdown. Angry, Anarchist mob worse than what they say Antifa is. Lafayette Square was ruthlessly swept by authorities in an instant for a Bible photo op yet these people are able to swarm here?? Where is the military? The National Guard? #capital#couppic.twitter.com/7DbEgVqhHT

This is next level insanity pic.twitter.com/sYRQa4R65y

So you can just breach our Capital? What message does this send to our adversaries? If someone was sent to destroy America, you could not find a better enabler than @realDonaldTrump

In NYC during the summer, we saw footage of police bashing bicycles over peaceful protesters heads, ramming through a bunch with their cars, shoving @zayer_dounya for simply walking in their pathway. And this is being allowed to go on inside the Capital right now: https://t.co/eFOQjwa1MX

What is happening right now is absolutely disgusting and repulsive...
I pray for everybody’s safety

That DC surge into the Capitol building by a bunch of white nationalist incels would’ve been a bloodbath if it was BLM or Antifa.

Of course we all thought it, but it can now be confirmed that Trump supporters are easily the dumbest motherfuckers on the planet.
This is what happens when you support a rich kid half-man with bone spurs that hosts a reality tv show.

Been looking forward to the people storming the Capitol, but I thought it would be to stop the lies and corruption, not support it.

Under the guise of #SaveAmericaRally and #StopTheSteaI2021, ignorant white racists are lashing out like wounded animals to undermine democracy!! pic.twitter.com/qQRsJ4idrM

What you're seeing at the U.S. Capitol isn't anarchy.

It's a violent attempt by domestic terrorists at overthrowing representative democracy in favor of racist authoritarianism.

Pow 💥 I told ya’ll shit was gonna get wild before this BS is over. https://t.co/ehxeq1LyG5

Just imagine for a second if BLM tried this BS.. Just sayin.