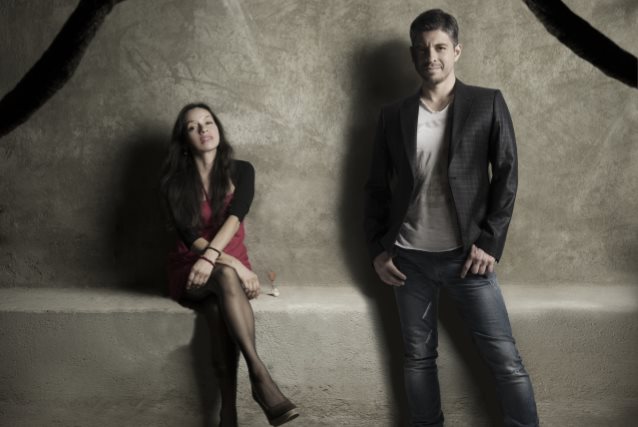 Mexican acoustic rock maestros RODRIGO Y GABRIELA — consisting of Rodrigo Sánchez and Gabriela Quintero — are set to continue their triumphant U.S. tour, as they celebrate the tenth anniversary re-release of their classic self-titled break-out album. Marc Scibilia has been tapped as the opening act on select dates.

The performance schedule begins on November 2 in Burlington, Vermont, and extends until November 25, concluding with three shows in Florida. The new concerts are in addition to the duo's previously announced appearances in South America opening for John Mayer in October.

* Due to Hurricane Irma, tickets for these dates will go on sale on September 22

Originally released in Ireland in 2006, the "Rodrigo Y Gabriela" album topped the charts ahead of Johnny Cash and the ARCTIC MONKEYS, and a U.S. release on ATO Records followed in 2007. "Rodrigo Y Gabriela" was produced by Rodrigo and Gabriela with John Leckie, best known for his work with RADIOHEAD and THE STONE ROSES. Affectionately known to fans as "the Crocodile album", the record has gone on to sell 750,000 copies worldwide.

The global success of the album, together with endless touring, established RODRIGO Y GABRIELA as one of the most popular acoustic instrumental artists in the world, with a string of sold-out tours of America, U.K., France and Japan, including multiple nights at the Royal Albert Hall, Hammersmith Apollo, Le Zenith (France),Red Rocks Amphitheatre, Radio City Music Hall (NYC) and the Hollywood Bowl.

Speaking of the "Rodrigo y Gabriela" album, Rodrigo said: "We are busy at work on our new record, but looking back at this album, it's good to be reminded of how far we've come in ten years." On the release of the "Live At The Olympia" concert, Gabriela added: "We had some crazy times in Ireland, and made many great friends there. The fans are so passionate about music, this is a thank you to them and our time in Dublin."

Asked in a 2010 interview if RODRIGO Y GABRIELA's metal connections were fading, Rodrigo said: "No, it's growing, actually. You go to our shows and you see a lot of metalheads. It was great to have the recognition from the kings, from METALLICA themselves, to be in touch with them and having the opportunity to jam with Robert pretty often. It's great, because that opened the door for a lot of metalheads to understand that we come from there. It's clear for the people that we love metal."