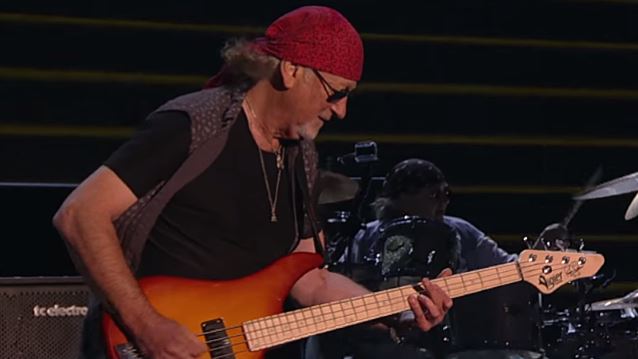 ROGER GLOVER: RITCHIE BLACKMORE Leaving DEEP PURPLE Was 'The Best Thing He Could Have Done For The Band'

DEEP PURPLE bassist Roger Glover was interviewed by rock journalist Mitch Lafon for a recent edition of the "One On One With Mitch Lafon" podcast (Facebook page). You can now listen to the chat using the Spreaker widget below. A couple of excerpts follow (transcribed by BLABBERMOUTH.NET).

On working with former DEEP PURPLE and RAINBOW guitarist Ritchie Blackmore and whether he would want to be involved with a possible RAINBOW reunion:

"Working with Ritchie… It's obviously… He's probably the most important musician I've ever worked with, alongside Jon Lord and Ian Gillan and Ian Paice and so on. And very influential, and certainly I wouldn't be here today without his input, and he was a brilliant guitarist — still is a brilliant guitarist. But more than that, he was an auteur, if you know what I mean. He wrote things in ways that people hadn't, and he attacked the guitar… He doesn't get his due, really, as an iconic guitar player. People talk about [Jeff] Beck and [Eric] Clapton and stuff, Ritchie should be right up there with them. But, in a way, he's made himself that way, because he's very single-minded. He works for himself. And if you're along with him for the ride, then you're privileged. But at the point where he doesn't need you, he doesn't need you anymore. We've had a few tough times with him, but we've also had some wonderful times with him. He made his decisions and he left the band, and, actually, it's the best thing he could have done for the band; we thank him for that. Because at that point, it was an unhappy band, and it became a happy band again. So he left us to be what we were gonna be, which is great. And he is doing what he wants to do, which is great. If he wants to start playing rock again, I think it would be… I wouldn't doubt that it would be great. And I wish him luck. As far as a reunion of RAINBOW is concerned, no, I wouldn't really be part of that. I'm too busy."

On whether he is bothered by DEEP PURPLE's exclusion from the Rock And Roll Hall Of Fame:

"Not at all, really. How can I put this? If you had asked me forty years ago if I wanted to be in the Rock And Roll Hall Of Fame, I would have gone, 'Oh, gosh! What a dream!' But now that it's being bandied about, as they say, it's not a dream anymore; it's actually a bit of an irritation. First of all, it's an American thing. It doesn't seem to be worldwide. Politically, it's American. And people say to me: 'Why the hell aren't you in there?' And I can't answer them. It's not up to us; we can't invite ourselves. And I can see that people are getting really pissed off about it. Lars Ulrich from METALLICA has gone on about it, and various other people. And, quite frankly, they should have done it twenty years ago when Jon Lord was still alive and it would have been nice to do that. Now, if it happens or not, we don't actually care. That's really where it's at. I think it's more important to our fans and maybe our families than it is to us in the band. If they do, they do. If they don't, they don't. We actually don't give a shit. In fact, I sometimes have the feeling that we should just tell them to shove it; we'd probably get a lot of publicity for that. But, you know, we're not that kind of band… yet. Who knows? It's not important, that's the point."

On WHITESNAKE's recently released "The Purple Album", which is billed as "a re-imagination of classic songs from David Coverdale's time as the lead singer for DEEP PURPLE's Mark III and Mark IV studio albums":

"Well, I didn't hear the album — I don't have the album — but I did [hear], I think, the first track they did… 'Burn', I think, it was. I mean, [it was] very slick, very television friendly, very generic rock, if you like. Rock's become very generic as everyone plays the same thing. And [there's] nothing wrong with the musicians — they're great musicians he's got, and he's got a great voice. I don't have feelings one way or the other about it, really. If he wants to do it, he wants to do it. We actually did one [re-recording] ourselves. We were playing 'Bloodsucker' many years ago, which is from 'In Rock', and a lot of people came up to us and said, 'Oh, I love the new song.' So [we thought, if people] think it's a new song, let's do a new version of it, which we did. Whether you like it or not, it doesn't matter — it's only one [song]. Doing a whole album of stuff… I don't know. I have no feelings, really. Good luck to him."

On what inspires DEEP PURPLE to continue making new music after all these years:

"I think it keeps your audience, and it grows your audience. We don't stop wanting to grow. And certainly, we can play the old classics with pride. Especially in Europe and other parts of the world, our audience is very young — the average age of the audience is somewhere around 20; lots of teenagers and kids come to our shows. So they're hearing those songs for the first time, so, in a way, they become new again. Because you perform them and her them through their ears. But we are songwriters. You don't stop doing what you do; you just do it. People say, the album format is dead, and it probably is, but not for us. I think if you're a band, you make your own rules. Or if you're an artist in general, you should make your own rules. Don't let other people make your rules for you. People say the album format is dead. So what? We're gonna carry on making albums, because we're an album band; that's how we define ourselves. An album is, really, kind of a snapshot of the state of the band at that particular time and in that particular year, and the hardcore fans, certainly, are interested in that. And it's really as much for the fans as it is for us. I'm a fan myself. When I first heard Chuck Berry, I went, 'Oh, I wanna hear more.' So you delve into it, and you get to the history, and you hear more, and then you hear everything, and then you learn where he got it from, and you go back in time and listen to the old blues. Music's kind of a wonderful journey you can go on, if you want. And albums are chapters in that book."