ROTTING CHRIST's SAKIS TOLIS: 'I Did This Without Making Money For 20 Years, But I Did It'

Chart of Pavillon 666 conducted an interview with frontman Sakis Tolis of Greek extreme metal veterans ROTTING CHRIST prior to the band's February 6 concert at Cco Jean Pierre Lachaize in Villeurbanne, France. You can watch the entire chat below. A few excerpts follow (transcribed by BLABBERMOUTH.NET).

On choosing the songs for the band's forthcoming best-of compilation, "Their Greatest Spells":

Sakis: "It was a nightmare to choose between 200 songs we have recorded. Only 33 [could make it]. That was a pain, but we tried to choose songs from all of our albums and all of our periods. I did the best [I could]. I'm sure that no one will be one-hundred percent satisfied, but you have to sacrifice some songs. It's a best-of, it's 30 years of the band. This year we celebrate with some releases, some old-school releases, some seven-inch EPs, some cassettes like we used to do back in the day. We like this idea. We like very much this idea; we like the spirit. Celebrate 30 years, so we'd like to celebrate it with something like this."

On whether he thought ROTTING CHRIST would last 30 years upon their 1988 formation:

Sakis: "It's a full life. No, of course [not]…you don't start the band to exist for 30 years or to be famous or rich or whatever the fuck. We just started the band because I wanted to sound like my idols back then. I wanted to play only one show and now I'm in a position where I've played 1,500 shows. And, no, I didn't expect something like this, but the spirit remains the same, even if I'm not that young. I still have the spirit and the hope that if we are in good health to keep playing with the band until our death. If health permits, of course. It's not up to me. If health does not permit, then I will not serve."

On whether there's anything from ROTTING CHRIST's career he'd like to re-do:

Sakis: "Yes, I could change some contracts. We used to sign everywhere without reading the contracts. I was very much in love with music, so I didn't care about paperwork. So, maybe I could change some of the wrong decisions I [made] with the contracts, but still, I learn from my mistakes. That made me more powerful. That's very important. That made me very powerful. So, let's say, maybe I wouldn't change anything in the end. If something doesn't kill me, it makes me stronger."

On what advice he would give to younger bands:

Sakis: "I don't know. I grew up in a very different era than nowadays. I remember I took the train with my band back in the '90s and we toured Europe on the train. It would be very hard nowadays for something like this to happen. I remember, myself, I did this without [making] money for 20 years, but I did it. I could survive because the situation wasn't like it is today. Things were better back in the day, or maybe more easy to make sacrifices like I used to make. So, if new bands want advice, it's just to concentrate on what they're doing and if they don't achieve something, that's no problem. Life is not only for them, everyone is good at something. For instance, if you tell me to do something else than music, believe me, it would be very bad. Someone else should be very good at something else. You need my music sometimes, I need your work. Everyone needs everyone. I suggest just be yourself, play your music, but be yourself, that's important. If you don't achieve something, no problem. Life is short, you should enjoy it."

On whether he's working on new ROTTING CHRIST material:

Sakis: "When I get back from this tour, I will start to write the new album, slowly. I have many ideas. I have a very strong [surge of creativity] for the next [album]. It's very hard for me because it will be album number 14. I hope to come up with something to satisfy [the fans]."

"Their Greatest Spells" will be released on March 23 via Season Of Mist. This double-CD compilation features a best-of selection approved by Tolis as well as the new track "I Will Not Serve", which can be streamed below. 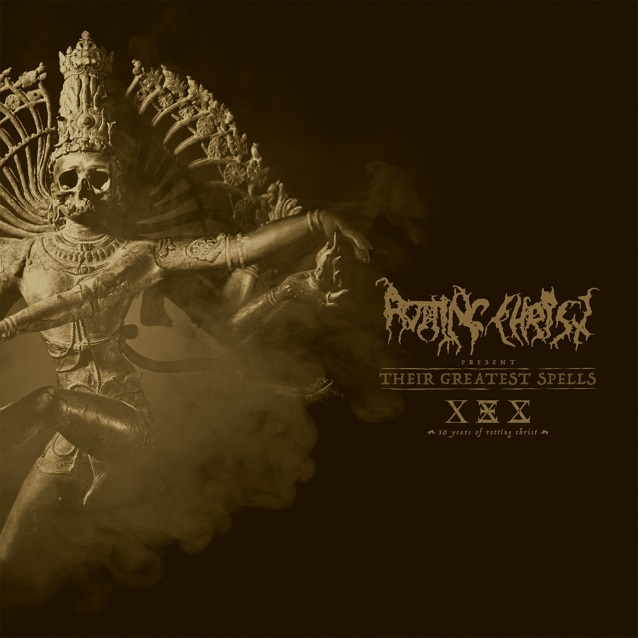