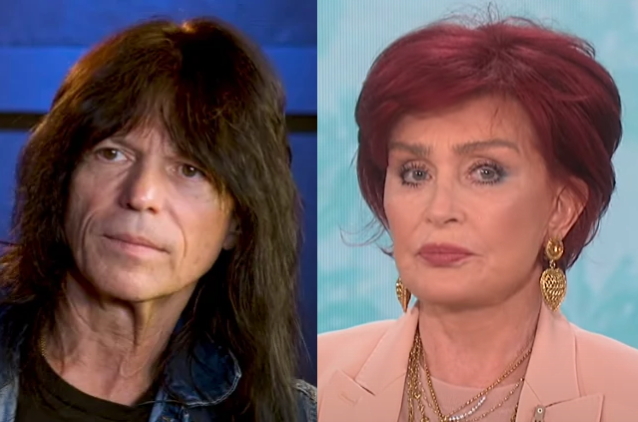 Rudy Sarzo has has dismissed as untrue allegations of racism on the part of Sharon Osbourne.

This past March, journalist Yashar Ali published a report alleging that Ozzy Osbourne's wife and manager referred to her former "The Talk" co-host Julie Chen as "wonton" and "slanty eyes," citing multiple unnamed sources, including another former "The Talk" co-host Leah Remini. Sharon later called the claims "crap, all crap" in an interview with Daily Mail, saying that it was "a pile-on. People want to add fuel to the fire and it comes with the territory and that's fine," she said.

Sarzo discussed Sharon's allegedly racist behavior in a new interview with Ultimate Guitar. While looking back on his 1981-1982 stint in Ozzy Osbourne's band and how he joined the fold only at the recommendation of Randy Rhoads, Rudy was asked how Sharon was viewed within the band. He replied: "Okay, I'm going to tell you this one from experience. I wasn't only in the band, I used to live with them [Sharon and Ozzy].

"I went from sleeping on the floor in Kevin's [DuBrow, QUIET RIOT singer] apartment to living at [Sharon's father and Ozzy manager] Don Arden's mansion. I had my own bungalow.

"The night I got the gig, I was staying at Don Arden's house with them. That's how much they trusted Randy, to bring this guy who had no resume.

"The only resume I had was that I played with Randy in QUIET RIOT," he continued. "They knew nothing about me. I got that gig because they trusted Randy. So they allowed me into their home and I was living with them.

"When you live with someone, you really know them. We only had one tour bus with everybody on it — so I lived with them on the road too.

"I'm Cuban, and I was even more Cuban 40 years ago. I had been 20 years in the country when I got the Ozzy gig. I wasn't even an American citizen then! I didn't even have a passport. As a matter of fact, Sharon said we were going to Europe and I had to tell her I didn't have a passport because I wasn't a citizen. She said, 'Don't worry about it.' So they gave me a re-entry permit. It was just a piece of paper that said I could return to the United States because I had a green card.

"So here I am, I land in Germany, and there were a lot of airplane hijackings going on at the time, and they were taking the planes to Cuba. So I landed in Hamburg and I was the last guy in the band going through customs. The agent asked for my passport and I handed him this piece of paper and he starts looking at it and throwing it around the desk and before I knew it, there were guys with machine guns pointing at me. I thought they were going to send me back to Cuba. I was freaking out. Finally, the promoter shows up and pays the guys and gives me my visa, and gets me into the country. So once I got back to the U.S., I got my citizenship and got my passport.

"My point in all this is that there has been a lot of gossip — and I say gossip because it's not true — about Sharon being racist," Rudy added.

"Name me an artist who has had more diverse members in their band. I was Cuban, [guitarist] Jake E. Lee was half-Japanese, Randy Castillo who was Native American [Apache], Robert Trujillo, Mike Inez... If there was even a molecule of racism from Sharon, that wouldn't have happened, because not only are you in the band, but you're also living with these people. We lived with Sharon and Ozzy, we were part of their lives and if Sharon was racist, that would never have happened, and I can guarantee that.

"As far as being tough, if a male manager were to make the same decisions that Sharon has made for the past 40 years, he would be considered a great businessman. But if a woman makes those decisions it is seen in a different way. I won't use the word, but...

"They were fantastic with me. I owe them my career. I really do."

In March, Sharon was forced out of "The Talk" following her emotional defense of pal Piers Morgan's criticism of Meghan Markle.

When former "The Talk" co-host Holly Robinson Peete alleged that Sharon had called her too "ghetto" to be on the show and responsible for her eventual ousting, Osbourne tweeted: "Never in my life did I utter the words that Holly was 'too ghetto' to be on 'The Talk', as well as not having her fired." Osbourne also denied all other claims and said that she was "disappointed but unfazed and hardly surprised by the lies, the recasting of history and the bitterness coming out at this moment."