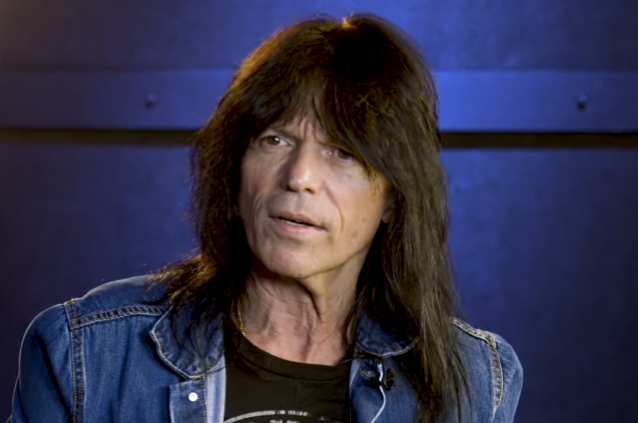 After the tour's initial seven-date run was completed in December 2017, Ronnie's hologram underwent some changes before the launch of the first 2019 leg of the "Dio Returns", which kicked off on May 31 at the Barbara B. Mann Performing Arts Hall in Fort Myers, Florida and concluded on June 28 in Los Angeles, California.

Asked by "Ouch, You're On My Hair" podcast if he has seen the Dio hologram tour and what his opinion of it is, Rudy said (hear audio below): "No, I haven't seen it. What I think of it is — I'm very aware of where the love is coming from. Let's put it this way: if his own band does not go out and basically promote his legacy, maintain it… It is really our responsibility to do that with all the bands that we tour with, to keep the legacy of the musicians alive, of our bandmates. Because once they're gone, if that music is not being performed and alive, it will just disappear. And who better than the people that actually played [with Ronnie], or were part of the band, to actually do that? And I know them — I know every single one of them. We're all part of the DIO family, and I know it comes from a place of love."

Sarzo joined DIO in 2004 and remained a member of Ronnie's band until the singer's death nine years ago.

Since the early 1980s, Sarzo has played with some of the biggest bands and artists in hard rock and heavy metal, including OZZY OSBOURNE (alongside renowned guitarist Randy Rhoads),QUIET RIOT, WHITESNAKE and Geoff Tate's version of QUEENSRŸCHE, not to mention a five-year stint with hard rock juggernauts BLUE ÖYSTER CULT and an ongoing run with THE GUESS WHO.

Sarzo in 2006 published "Off The Rails", a book about his time with Osbourne and Rhoads.