If you would like to submit a question for Rudy to be read to him during his on-camera taping, please do so in the blog set up at the top of Denise's site. Please include your name and city/state/country so while reading your question(s) to him Ames can give you credit on the air.

The "Focus In The Mix With Denise Ames" episode featuring Rudy Sarzo will air in Los Angeles in September. It will also be available on DVD from Charter's Video On Demand.

A new collector's edition of Rudy Sarzo's book "Off The Rails: Aboard The Crazy Train In The Blizzard Of Ozz" is being released this month via TooSmart! Publishing. According to Sarzo, "The new edition is beautiful and includes many more pictures throughout the book as well as a 16-page glossy spread of Ross Halfin photos from the beginning of our tour."

"Off the Rails" includes a first-person account from Rudy's personal day-by-day diary of events while touring with Ozzy Osbourne and Randy Rhoads in the early Eighties. The book was originally due in 2005 but was delayed after Sharon Osbourne allegedly applied pressure to have it pulled. 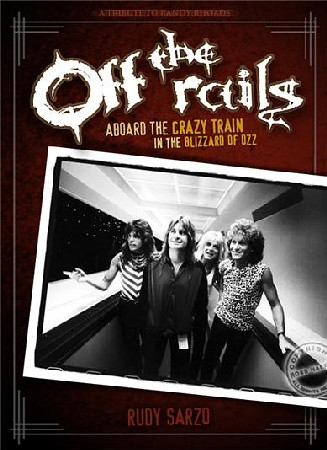