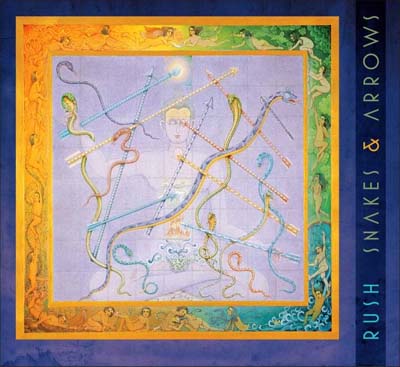 The final artwork for RUSH's new album, "Snakes & Arrows", has been posted online at this location (the previously released artwork was apparently not the real deal).

Due on May 1 via Anthem/Atlantic, "Snakes & Arrows" will contain the following track listing:

A 45-second audio sample of the album's first single, "Far Cry", has been posted online at this location.

In a recent interview with Revolver magazine (web site),RUSH vocalist/bassist Geddy Lee stated about the upcoming CD, "It's hard to describe. It's big, it's bold, and I think it's some of the best work we've done in years. I'm really pleased with the quality of the songs, and there's lots of playing on it."

"Snakes & Arrows" promises to be the most organic-sounding RUSH effort in decades, having been influenced by their experience of making "Feedback", the band's 2004 EP of classic-rock covers.

"Playing those songs that we loved and grew up on, I think it helped us remember how sometimes it's the simplicity or the directness of an arrangement that really makes a great song," Lee told Revolver. "And the other thing is, we played all together in the studio for a lot of the 'Feedback' stuff. That's something that a lot of producers had been pushing us to do for a while but which we hadn't done in years. It was great to turn off the click and just play — you know, not worry so much about being so, quote, metronomic — and that definitely carried over into this record."

The tracks for RUSH's new album were put to tape at Allaire Studios in upstate New York with co-producer Nick Raskulinecz. "I have never enjoyed the recording process so much, nor been so satisfied with the results," drummer Neil Peart wrote in December on his web site.

Peart previously told Billboard.com some of his lyrics for the new songs were inspired by his motorcycle journeys throughout the United States, chronicled in the recent book "Roadshow: Landscape with Drums".

"Just seeing the power of evangelical Christianity and contrasting that with the power of fundamentalist religion all over the world in its different forms had a big effect on me," he said.