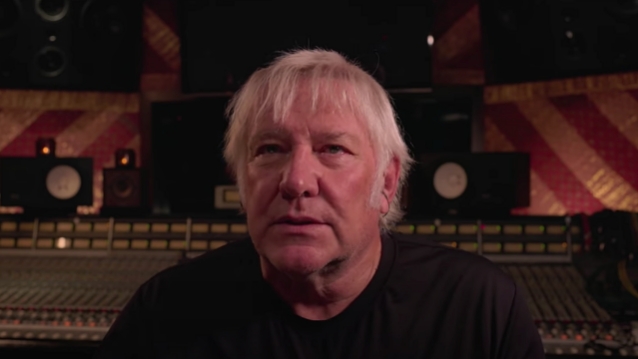 RUSH's ALEX LIFESON Is 'Really Excited' About His New Project

RUSH guitarist Alex Lifeson spoke to Andertons Music Co about the music he has been working on since the completion of the band's final tour nearly six years ago. He said (as transcribed by BLABBERMOUTH.NET): "I have two tracks on my web site that were in the video [to promote the release of the new Alex Lifeson Epiphone Les Paul Standard Axcess guitar] — 'Kabul Blues' and 'Spy House', they're called. So that's a little indication of some of the stuff I've been doing in the last four or five years. Currently, I've been working with Andy Curran [of CONEY HATCH] on some material. He sent me some stuff that he was working on — boy, it's gotta be four years [ago] now — and he just asked if I would put some guitars on it for him, which I did do. And then another track came. And then he changed singers. And Maiah Wynne is the current singer in this project. She's from Portland, Oregon — a fantastic voice; a great singer with great sensibilities. And the project just started growing and growing. And then I found that I was replacing parts that I did earlier because they were just sort of casual little guitar bits into something more substantial. And now we have about 10 or 11 songs that we have in album format that we're mixing right now. And hopefully we'll have something to listen to in the late summer [or] early fall of this year. I'm really excited about it. 'Cause her voice is very fragile and delicate in a lot of ways, and that contrasting with the heavy, dark music that we put together, it's a really, really cool combination and I really love the stuff."

Asked if the project, which is tentatively dubbed ENVY OF NONE, will do any touring once the album is released, Alex said: "[It's] too early to say, especially after the pandemic. We're just starting to get back into that whole thing. Right now we're focused on doing the mixes and getting it sounding the way we want it to and see what we can do in terms of distribution. And then we'll see."