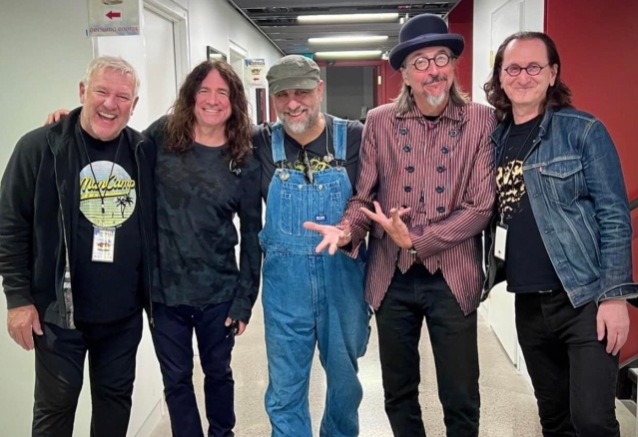 RUSH members Geddy Lee and Alex Lifeson were in attendance on Friday (May 13) at Massey Hall, Toronto, Ontario, Canada as PRIMUS performed RUSH's 1977 album "A Farewell To Kings" in its entirety as part of the "A Tribute To Kings" tour with special guests THE SWORD.

On Sunday (May 15),Lee took to his Instagram to share a backstage photo of the RUSH and PRIMUS musicians, and he included the following message: "On Friday night we had the joyful experience of reuniting with our grand pals from PRIMUS… Les, Ler, Herb and their gang… We sat side stage as they immaculately worked through a cool selection of classic PRIMUS tunes which brought back fond memories of our touring together back in the early 90's and then we were treated to the weird and wonderful experience of watching them perform our music: A Farewell to Kings in it's entirety. Totally nailed it! They did us proud and we thank them deeply for the tribute and the lasting friendship."

PRIMUS frontman Les Claypool recently told the Nashville Tennessean about why he and his bandmates decided on "A Farewell To Kings": We always joked that we were going to play 'Hemispheres' in its entirety. And then it was, like, 'Well, maybe we should do something like that.' '2112' seemed a little too obvious. 'Moving Pictures' seemed a little too obvious. So, 'A Farewell To Kings' seemed like the right choice."

Regarding how PRIMUS approaches a tribute show, Claypool said: "I was one of those guys as a high schooler, sitting in the audience ... knowing every single note. RUSH fans are very scrutinizing. They'll tell you, we were one of the only bands accepted by the RUSH crowd back in the day when we were touring with them. That being said, it's very precious to a lot of people. We're taking it very seriously. I'll tell you, we've never rehearsed as a band this much in our lives as we did for this RUSH thing. We're doing it as close as we possibly can to the way they would do it."

As for PRIMUS's relationship with RUSH fans at each show, Les said: "There's usually like four or five people scattered towards the front [who] are so into it. They're singing all the words and some of them get teared up. It's pretty amazing. I know for me, as a teenager, RUSH was such a big part of me starting out as a musician. I see these people [who] all these years have been so devoted to that band. To have people have that experience is very endearing."

Claypool previously told Rolling Stone that the "A Tribute To Kings" tour was about paying tribute to a band that has given him so much inspiration over the years.

"A Tribute To Kings" is just the latest in a long series of RUSH-related milestones for PRIMUS, which first opened for its musical heroes in 1992.

"Geddy, Alex and Neil had been superheroes to Larry, Herb and I in our teens," Claypool recalled, "so when we all became pals while touring together in the early '90s, we were pretty delighted; partially because of the musical geek-out factor but mostly because the three guys whom we had admired so much from afar turned out to be truly great, down-to-earth humans, and like us, a tad eccentric."