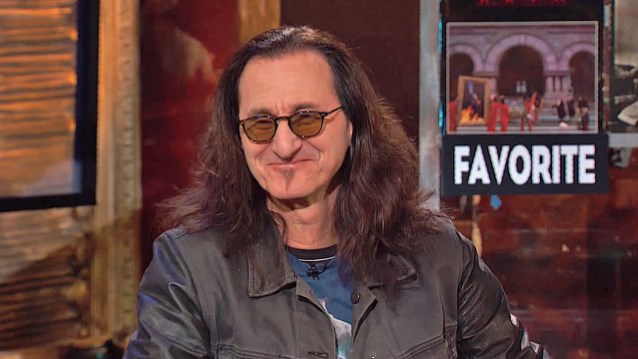 RUSH bassist/vocalist Geddy Lee has confirmed the longstanding rumor that he almost produced METALLICA's classic 1986 album "Master Of Puppets". He told Noisey: "It's sort of true. There was some discussion with [METALLICA drummer Lars Ulrich], back in the day, about working with them. This was before 'Master Of Puppets' came out, I think. There was talk, you know. I was friends with their management, and I met Lars back in England. I remember going to see them here in Toronto when they played at the Masonic Temple. That's when the original bass player [Cliff Burton] was still happening. You know, before that tragedy. And, you know, we talked about it, and I liked their band a lot at that time. But it just never came together."

During the same interview, Lee admitted that he isn't much of a heavy metal fan.

"I don't listen to a lot of metal," he said. "Even though there's an aspect of our sound that can be quite metal, I sort of attribute it more to early metal, in the way that [LED] ZEPPELIN were metal and in the way that BLACK SABBATH were metal, and BLUE CHEER were metal. And that's the sort of tradition of metal that we took on."

He continued: "I like METALLICA. I've got great respect for them. But you won't hear too much speed metal or death metal in my house."

"Master Of Puppets" was the last album to feature bassist Cliff Burton, who died in a tour bus crash in September 1986 and was replaced by Jason Newsted. It was METALLICA's first album to go gold, for sales of more than half a million copies. Many songs from the disc, including "Welcome Home (Sanitarium)", "Battery", "Leper Messiah" and the title track are still part of the band's live set to this day.

As previously reported, METALLICA is collaborating with an author named Matt Taylor on a book about the making of the band's classic 1986 album "Master Of Puppets".

The book is expected to arrive next year to coincide with the 30th anniversary of the album's release, which will take place in February 2016.