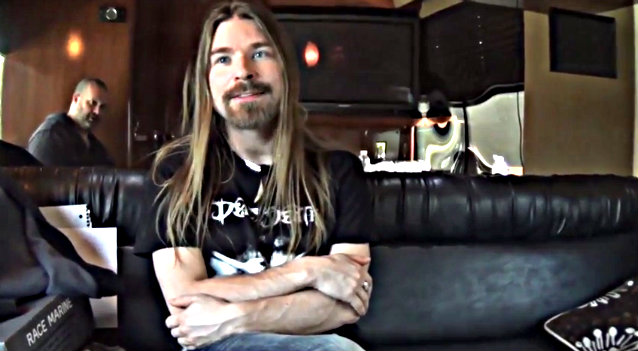 PittsburghMusicMagazine.com conducted an interview with bassist Pär Sundström of Swedish metallers SABATON on April 9 in Pittsburgh, Pennsylvania. You can now watch the chat below.

In a recent interview with Bring The Noise, SABATON bassist Pär Sundström stated about "Heroes": In the beginning, when you make an album, I get quite nervous about whether people are going to like it, but after having so many people and friends listen to the album and them saying it's great, I now feel comfortable. About an hour and a half ago, our first single was premiered on Swedish radio and people are really excited about it. I am very happy."

Asked about the album's running theme, Sundström said: "SABATON has been — since 2005 — about historical themes, a lot about World War Two and battles and stuff. In 2010, we did an album called 'Coat Of Arms', that was mainly about World War Two, but we also put in a long story about a single person; me and Joakim [Brodén, vocals] write the lyrics and after we finished recording 'Coat Of Arms', we had one story left that we wanted to write about. That was a story about Witold Pilecki, that was the song called 'Inmate 4859'. This song, we decided, we could not do it in 2010 because the album was done and we could not do it on the next album because that was about Swedish history…so we have waited four years and have been saving that story for this album and we kept it as our leading star into the new album."