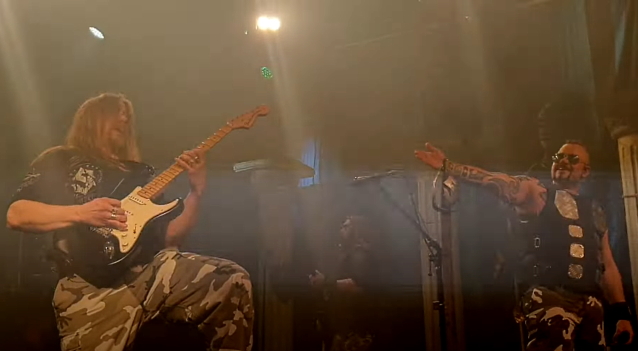 Swedish metallers SABATON were rejoined by their former guitarist Thobbe Englund on stage this past Thursday (April 14) at their hometown concert at Kulturföreningen Magasinet in Falun. Fan-filmed video of his appearance can be see below.

The day after the show, SABATON shared a photo of the reunion on its social media and included the following message: "Last night we played a sold-out show in our hometown, Falun, as part of our Swedish tour. Gracing us on stage was Thobbe Englund, our old guitarist, who joined us for a few songs. Together we forged a powerful triple guitar assault that was both epic and emotional. It has been 6 years since Thobbe left SABATON."

Back in 2016, SABATON singer Joakim Brodén told The Metal Voice about Englund's decision to leave the band: "We wear people out, I think. [Laughs] In a sense, it's part of the reason, actually.

"When we did the most intensive period we had in our career, it was 170 shows from April '14 to April '15 — twelve months there — of course, you don't play every day, so if you 170 shows, that probably means you were on the road, or away from home, for 270 days that year," he explained. "So I totally understand why, even though most people get into doing this… I've seen it before, and it's gonna happen again, I guess, that people [are like], 'Yeah, of course, I don't wanna do anything else. And then, after a couple of years, [they're like], 'Oh, man. I thought I wanted this.' [Laughs]"

When Thobbe announced his decision to exit SABATON, he said in a statement: "I have in recent years become more aware of what would make me feel real happiness and content, and that is to expand my own creativeness in combination with a somewhat stiller life, where I will not tour all year round at the speed of light."

SABATON is considered to be one the most important bands to emerge from the Swedish modern metal scene, having been honored with five Metal Hammer Golden Gods Awards (including "Best Live Band" three different years) and nominated several times for the Swedish equivalent of the Grammy Awards, the Grammis. In 2016, SABATON's "The Last Stand" album debuted at No. 1 in three different European countries and cracked the Top 3 in four others. Brodén, Sundström, Chris Rörland (guitar),Hannes Van Dahl (drums) and Tommy Johansson (guitar) curate a festival of their own, Sabaton Open Air, that started back in 2008, as well as their own forward-thinking Sabaton Cruise which has been held since 2009.

Last month, SABATON announced "The Tour To End All Tours - North America 2022", a 25-date U.S. trek that will include a special headline show at Montreal's Place Bell, the band's first-ever arena headline concert in Canada. The tour, produced by FPC Live, kicks off on Thursday, September 15 at the Paramount Theatre in Seattle, Washington, and will wrap up at New York City's Hammerstein Ballroom on October 23. Supporting SABATON on all dates will be special guest EPICA, the renowned Dutch symphonic metal band. 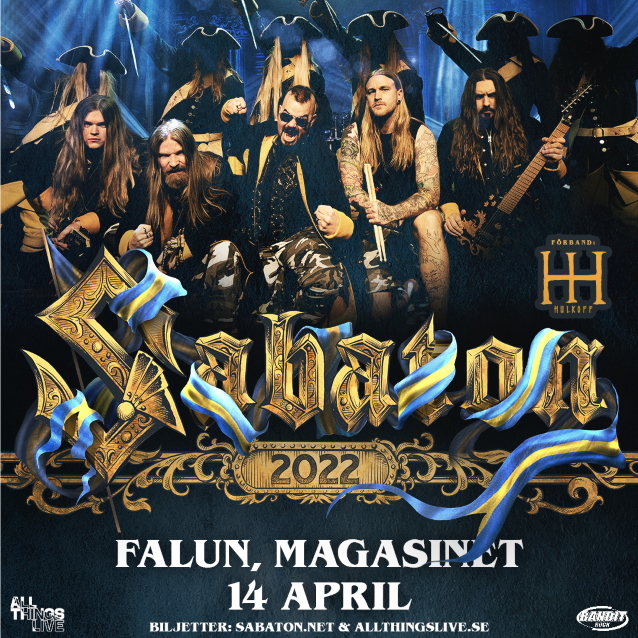