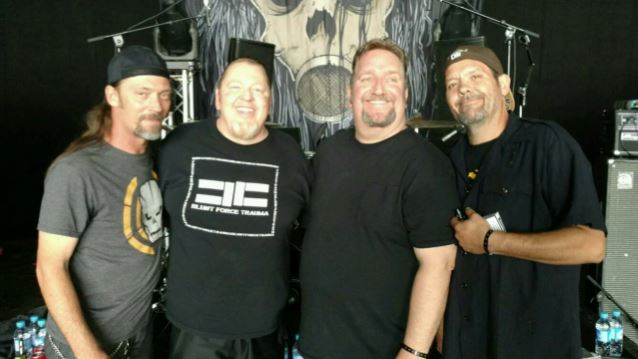 Greg Hall has announced his departure from SACRED REICH. The drummer revealed his split with the veteran Arizona thrashers in a post on his personal Facebook page. He wrote: "So... I want you all to hear this directly from me. I am no longer the drummer for SACRED REICH. I was (rather abruptly and by phone, I might add) fired.

"I won't go into details at this time; you will hear my story when the time is right. I just want everyone to know how much it has meant to me to play for you! Those moments on stage were some of the greatest times of my life. To be able to see and do the things I have has been an incredible odyssey.

"I don't know what the future holds for me — none of us do — but I do know you can kick me out but you will not keep me down."

SACRED REICH frontman Phil Rind confirmed the band's split with Hall, telling BLABBERMOUTH.NET in a statement: "It's true. We wish Greg the best."

One of the founding members of SACRED REICH, Hall was in the band from its formation in 1985 until his initial exit in 1991. He was replaced by drummer Dave McClain for the last two SACRED REICH studio albums, 1993's "Independent" and 1996's "Heal", before rejoining the band for 1997's live album "Still Ignorant".

SACRED REICH is part of the second wave of thrash, along with TESTAMENT, DEATH ANGEL, DESTRUCTION and DARK ANGEL. Over the years, SACRED REICH has produced a catalog of politically charged aggressive songs that have stood the test of time.

SACRED REICH broke up in 2000 and remained inactive until 2006 when they received offers to perform at European festivals. The have been playing sporadic shows ever since.

During an appearance on an episode of "The Official Danko Jones Podcast", Rind said that the band has reconsidered its previous stance on recording new material.