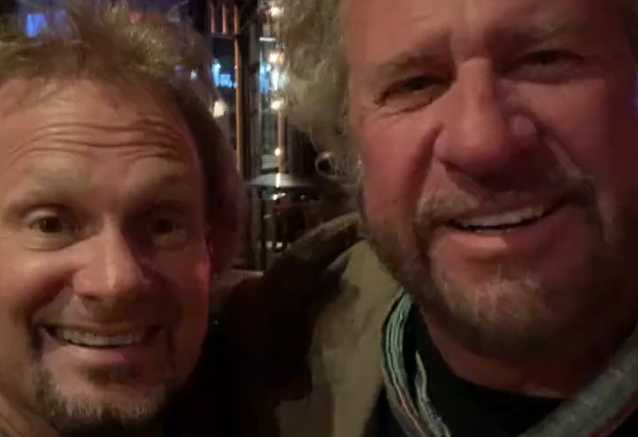 July 20 was the 17th anniversary of the release of "The Best Of Both Worlds", the second greatest-hits album by VAN HALEN. The compilation features material recorded with lead vocalists David Lee Roth and Sammy Hagar, but omitting Gary Cherone's three-year tenure with the band. Prior to "The Best Of Both Worlds" release, Hagar reunited with VAN HALEN, and the band subsequently recorded three new tracks to include on the album.

"The Best Of Both Worlds" debuted at No. 3 on the Billboard chart and coincided with a reunion tour. It is the last VAN HALEN album to feature contributions from Hagar and bassist Michael Anthony.

Earlier this week, Hagar and Anthony took to social media to offer their reflections on the album.

Sammy wrote: "It was interesting going back in the studio with VAN HALEN after all those years and creating new music for every package of the greatest hits. This kind of thing is what broke the band up the first time in '95. I was against doing a greatest-hits of any kind and wanted to make a new record. That never got to happen, and this go around it didn't either. My favorite track hands down is 'Up For Breakfast' — it was fun writing and singing those lyrics. Makes me think we should add that to THE CIRCLE set list. Looking back now, I really wish we would've made a whole new record."

Added Mike: "As this was all happening, I was pretty much estranged from the band and the Van Halen brothers. I remember Sammy meeting with Alex, and from there talks of a reunion started. After negotiating and me pretty much giving up all my claims to anything VAN HALEN, I was back in and ended up coming into the studio to sing the backgrounds on three songs that were recorded, 'It's About Time' being one of them. Then we started preparing for what would be the 2004 reunion tour."

Hagar, Eddie, Alex Van Halen and Anthony last teamed up in 2004 for a U.S. summer tour. In exchange for taking part in the tour, Anthony reportedly had to agree to take a pay cut and sign away his rights to the band name and logo.