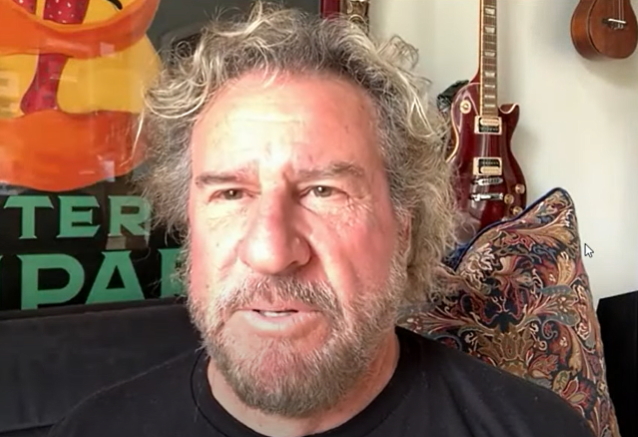 SAMMY HAGAR 'Knew' EDDIE VAN HALEN's Health Was Declining In Weeks Prior To His Death: 'It Was Heartbreaking'

Sammy Hagar stopped by the KLOS virtual series "New & Approved" to speak with Matt Pinfield about his extensive career and how he mended his relationship with the late Eddie Van Halen.

Prior to the guitarist's October 2020 passing, Sammy said that the two were fortunately able to reconnect thanks to the great comedian George Lopez.

"It was just so awesome," Hagar recalled (as transcribed by BLABBERMOUT.NET). "'Cause I had reached out to Eddie on his birthday for a couple of years. New Year's Day I would reach out to Eddie and Al [VAN HALEN drummer Alex Van Halen] both, and I'd say, 'Hey, Happy New Year, guys. I hope you're happy, and I hope this year's good for you.' I was really trying to be friends. I wasn't looking to join the band. I wasn't trying to put all that back together. Everyone probably took it that way. 'Oh, yeah, he just wants to get back in the band.' I did not wanna get back in the band. As much as I love that band… If you said to me today, ['You can play] one last show with Eddie, Alex and Michael [Anthony],' one last show, [I would say], 'Absolutely.' That ain't gonna happen. But at the time, I wasn't looking to join the band. I like what I'm doing; I'm happy.

"I think it was about two years in a row I did that," Sammy continued. "And then once finally Eddie reached out and said "Thanks, man' back on my Instagram. 'Hey, thanks. Doing great,' or whatever. 'And a Happy New Year to you.' And I went, 'Oh. That was cool.' But then I reached out to Alex. I heard [Eddie] was sick, and I knew he was sick. But I started hearing bad things. So I reached out to Alex. He did not get back [to me]. I reached out to Matt, his right-hand man. No. I reached out even to [VAN HALEN's manager] Irving Azoff, and [he said], 'Give Al a call.' So I said, 'I don't wanna bug Eddie. I don't wanna call Eddie and have him tell me, 'Fuck you, you asshole.'' I'd go, 'Oh, no. Not this again.' So I wanted to talk with someone else first and see how he was doing and if he would be cool with me calling. Nobody's calling me. Nobody's calling me back. Nobody's responded to my e-mails, no response to my texts. So, George Lopez calls me, and he's a dear friend too. And he goes, 'Sam, you've gotta call Eddie,' and blah blah blah. I said, 'I tried to reach him.' [He says], 'Here's his number. I just talked to him. He loves you, man. He loves you.' And I said, 'Wow. Okay.' I call him, and he's going, 'What took you so long?' I'm going, 'Well, I called Al. I called this guy. I called that [guy].' And he goes, 'Well, you didn't call me.' And I said, 'Well, I'm calling you now.' And we just burst out laughing. And we just had a real nice relationship for probably four or five months, and then, all of a sudden, he wasn't returning the texts and he wasn't returning my calls and I wasn't getting no response for about a month. It was heartbreaking, 'cause I knew. And then one time I said, 'Hey, dude. What the fuck? You didn't give me no love.' And he goes, 'Man, I've been in the hospital.' And I'm, like, 'Oh, fuck.' And then that was the last I heard [from] him."