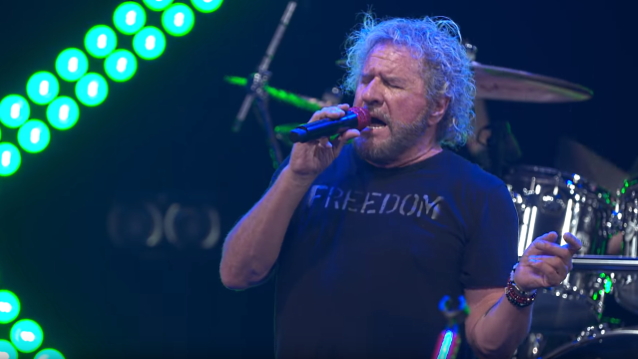 SAMMY HAGAR On THE CIRCLE's 'Space Between': 'I Got Hung Up On Trying To Make The Best Record I'd Ever Made In My Life'

During his November 19 appearance at the Grammy Museum in Los Angeles, veteran rock vocalist Sammy Hagar (VAN HALEN, MONTROSE, CHICKENFOOT) extensively discussed "Space Between", the debut album by his current group THE CIRCLE. A few excerpts follow (as transcribed by BLABBERMOUTH.NET).

On his initial hesitation to make an album with THE CIRCLE:

Sammy: "I didn't think I was going to make a record ever again. When I go out and play with THE CIRCLE, for five years we've been playing kind of like our greatest hits from the whole career, starting with MONTROSE through my solo stuff through VAN HALEN through the post-VAN HALEN [years]. We [also] played a couple LED ZEPPELIN songs. We had such a strong setlist [that] I thought, 'I'm scared to death to put a new song in between 'Right Now' and 'I Can't Drive 55''... I didn't know if I had another classic song [in me]. You go back and you listen to the history of writing with Eddie Van Halen, writing with Ronnie Montrose, even with Joe Satriani... This band, we were playing the hits so well. We were playing the MONTROSE songs better than MONTROSE. We were playing the VAN HALEN songs as good as VAN HALEN. I was in love with this band. I'm going, 'I've never heard those songs sound as good,' because everyone cared so much. Everyone was mature. We're not going on stage drunk or on drugs, and just really playing them from the right place. It made me nervous to say, 'How are we going to make a record better than this stuff?'"

On what encouraged him to move forward:

Sammy: "I started writing songs, and then I had a concept about greed. I thought, 'Without greed, it could be a more beautiful world.' I just got really upset about a few things on the news, and I started writing. Pretty soon, I realized it was a concept record. It's about money, greed, enlightenment and truth. At the end, you get my opinion of the truth."

On whether he drew inspiration from other concept albums:

Sammy: "I was raised on PINK FLOYD and THE WHO and even THE BEATLES, 'Sgt. Pepper' and stuff like that. But I didn't try to emulate anything. I went into it so blind, I kept saying, 'It's not a concept record. I've got this great idea for this one song. It might not quite fit,' and then I'd finish and I'd go, 'Oh, it does fit.' I had to shuffle the deck a little bit to make them come into a chronological order, but I'm so happy with it. At this stage in my life, I almost can't believe I did it, but I got so into it that I couldn't think of anything else. I was just completely taken over by this, and I've never had that happen to me in a long time."

On writing to a concept:

Sammy: "I found that writing in a concept where you had the same themes — I'm just writing about now what happens to that guy, instead of having to come up with a new story. When you're writing songs, it's hard, as many songs as I've written, coming up with some new ideas. You go, 'I wrote one great song. Now I've got to write another one.' But when you're thinking about what you're writing about the same subject, it's like watching a movie in your own head. It was so much easier. I don't think I'll ever write [again] unless I write a concept record. I got spoiled, because you're so focused."

On whether the songs for the album came quickly:

Sammy: "They did, but I got so hung up on trying to make the best record I'd ever made in my life. I read about PINK FLOYD making 'The Wall'. You just get so engulfed, and you can't come out until it's done. The songs came easy, but perfecting them... For the first time in my life, I re-cut songs, re-sang them, rewrote lyrics, went back [and] changed one word. I really got hung up, but it was a good hang-up. I couldn't wait to get into the studio every day."

On why he produced "Space Between" himself:

Sammy: "Normally, I get criticized by a lot of producers, because I'll go in and I'll do three vocal takes. I know my lyrics when I go in. I'm not reading lyrics when I'm in the studio, because you've got to study your songs so when you sing it, you can mean it. You've got to be telling the story. I've got my stuff together when I walk into the studio... A lot of guys [will ask], 'Just give me one more.' I go, 'Why? I'd rather be doing something else.' This time, I didn't do that. I tortured myself... I honestly didn't feel like trying to explain what was in my head to anyone, so I went in and started doing it myself... I could see the vision. When you can see light at the end of the tunnel, when you have an idea that you can see to the end of it and you see the whole picture, you've got to go to work to do it, but I saw that, and I heard it in my head and I was ready. I'm really happy with it. I'm satisfied — the first time I've ever had a record that I don't listen to now and go, 'Oooh, I could've sang that one more time.'"

On drummer Jason Bonham's performance on the album's "Can't Hang":

Sammy: "I wanted to bring Jason's influence [and] LED ZEPPELIN into the album. In THE CIRCLE, we play 'When The Levee Breaks', and Jason has his dad's original drum track, and we play it through the PA. It's so heavy. Alex Van Halen, his whole life, wanted that sound. Denny Carmassi wanted that sound. Everybody wanted that sound and that beat, so I said to Jason, 'Give me that drum track. Let me use it in the studio,' and I wrote a song to it. I jammed with Jason's dad for 12 hours, and I played this riff. It's called 'Can't Hang'. Then I had to speed it up a little bit because it was too slow, so we sped his dad's track up. I finished the whole [song] without Jason. He got so emotional — he said, 'Oh, mate. You've got to let me have a shot.' But he was on tour with his other band, and he said, 'I'll do it on my day off.' On Father's Day, on his day off, he went to a studio in Chicago and he took the track and he put the drums on it. It's phenomenal. He channeled his dad. Everything about it was so cool. It's as good as it gets."

On the album's closing track, "Hey Hey (Without Greed)":

Sammy: "I love that song. At the end of our CIRCLE shows, when we're all done, we show the video and play that song over the PA, and the audience starts singing the 'Hey, hey.' I walk off the stage with goosebumps. I walk off stage feeling so good, so warm, so healthy and so happy to have kind of an emotion where you know the whole audience gets it and it's so positive. That's one of the greatest things I think I've done in my whole career — write that song for that place in the set. We'll probably never play that song live — we'll play the record and let the people sing it on their way out. It's powerful. I'm sitting there going, 'I don't want to leave the stage — I want to sit there and sing with them until it's over.'"

THE CIRCLE's first album of all-original material, "Space Between", was released May 10 via BMG.