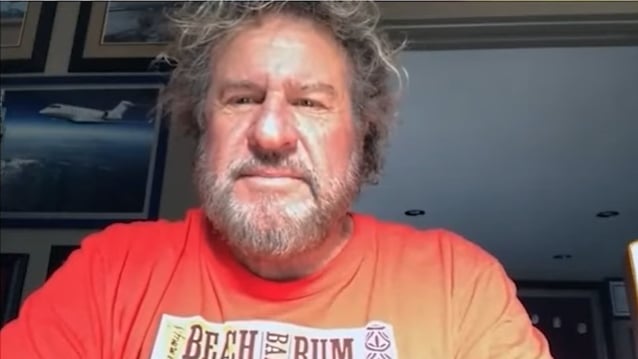 In a new interview with Radio.com, Sammy Hagar spoke about the possibility of playing more live shows during the coronavirus pandemic. Hagar and the rest of THE CIRCLE band performed last October at Sammy's annual birthday bash, which was moved to Catalina Island in California. The audience watched the concert via the boat-in, a limited amount of socially distanced chartered boats that purchased mooring reservations in the bay at Two Harbors.

Hagar said (see video below): "[Our booking] agency is trying to find ways to do [more shows]. The drive-in movie theater thing, that didn't appeal to me. I couldn't do it. My fans are crazy. So we did the Catalina Island thing, where we said, 'Well, let's have a boat-in and see how that works.' And that was cool, but it was so expensive. [Laughs] I mean, you wanna talk about paying to play. It's, like, man. We had a to build a stage, we had to bring production — everything — on the Catalina. We had to stay there a week, with building everything out, and we did a pay-per-view, and it was successful, but it was not financially successful. But that wasn't the idea — the idea was to finish up my birthday bash and get it done.

"Getting creative with it — I don't like creative with trying to do a concert," he explained. "I'm sorry. I don't wanna do 'em from my home. The little things we did [were] fun — the 'Lockdown Sessions' [where the members of THE CIRCLE recorded themselves playing covers while in quarantine] — we did some great, creative things. It was great. But it was fun for me. But I have my fun by walking out on stage for two hours and playing the music and entertaining and talking to the folks and getting the feedback. There's nothing that will ever replace that. And I need it. And I want it. And my fans need it. And they want it. And we've got to have it. So we've gotta get back to it.

"I don't wanna play to half a house, because I've been offered [things like], 'Okay, you can play in some states. But if it holds 10 thousand [people], you can only play for five,'" he added. "I don't care about playing for five [thousand] — I'd play for five hundred. I don't mind that at all. I just know that those five thousand people are not gonna stay in their seats and socially distance. The second we start getting it on and I start saying, 'Are we having any fun yet?' and holding the mic up in the air and [going], 'Right now,' they're gonna be at the front of the stage all unsocially distanced, and it's gonna get criticized or I'm gonna get sued or fined or something. So it's a bummer."

"Lockdown Sessions" began in March 2020, when the COVID-19 shelter-at-home order went into effect. With time on their hands and their upcoming tour in limbo, the band's legendary drummer Jason Bonham challenged his Hagar, Michael Anthony and Vic Johnson to record a warmup jam they'd been playing backstage before concerts for several years. Equipped with iPhones and their respective instruments, they each laid down their individual tracks from the den, music room, closet and even showers of their homes, and "Funky Feng Shui" and the band's "Lockdown Sessions" were born.

Last May, SAMMY HAGAR & THE CIRCLE's U.S. tour with NIGHT RANGER was officially canceled due to the coronavirus pandemic. Produced by Live Nation, the outing was scheduled to kick off July 9 in West Palm Beach, Florida at iTHINK Financial Amphitheatre and make stops in Tampa, Cincinnati, Dallas, Phoenix and more, before wrapping September 20 in Chula Vista, California at North Island Credit Union Amphitheatre.