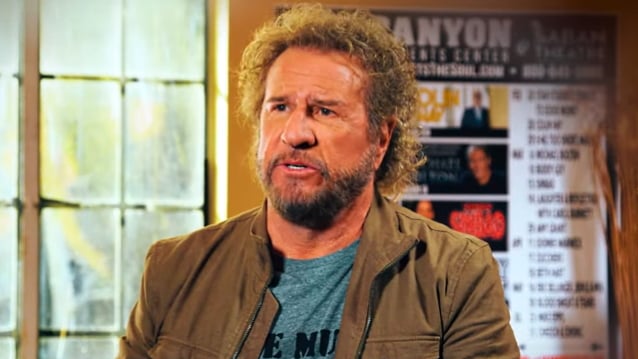 SAMMY HAGAR Says He Will Never Announce A Farewell Tour

In a new interview with with the KSHE 95 radio station, legendary rocker Sammy Hagar addressed the fact that a spate of iconic rock and metal bands have announced farewell tours in recent years, including KISS, BLACK SABBATH and Ozzy Osbourne. He said (hear audio below): "I haven't announced my farewell tour retirement yet… I have never announced my retirement and I've never made a farewell tour, and I don't think I ever will. How about that? I just won't bother with all that. I'll just keep playing till I drop — or till I'm not good anymore. If I'm not any good anymore, then I'll say, 'Well, I've gotta quit,' and I won't go do a farewell tour, 'cause I stink — I can't sing anymore, I can't play, I can't jump around, I can't walk out onstage; you have to wheel me out. So guess what? I'm not doing a farewell tour."

Hagar fronted MONTROSE from 1973 until 1975 and recorded two albums with the group — "Montrose" and "Paper Money". Both records were produced by Ted Templeman, who would go on to produce a number of albums by VAN HALEN, as well as Hagar's 1984 solo album "VOA".