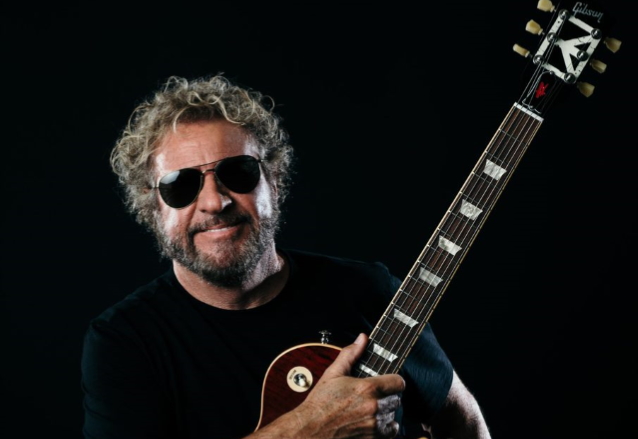 Sammy Hagar will be honored with a shrunken head at The Golden Tiki in Las Vegas, Nevada later today (Thursday, March 24).

To commemorate the occasion, The Golden Tiki will add four new drinks to its cocktail menu rolling out on National Cocktail Day. The cocktails will be made with Hagar's portfolio of award-winning spirits, Santo Tequila and Sammy's Beach Bar Rum. The bar will also carry Hagar's new line of sparkling rum cocktails, Sammy's Beach Bar Cocktail Co.

Hagar, who recently kicked off his second residency at The Strat Hotel, Casino & SkyPod in Las Vegas, will join several celebrities who have been honored with shrunken heads over the years, including Rod Stewart, Vinnie Paul Abbott (PANTERA, HELLYEAH) and Rich Little.

For more than four decades, Hagar has been recognized as one of the best and most accomplished lead singers and songwriters in rock music. From breaking into the industry with the seminal hard rock band MONTROSE, to his multi-platinum solo career, to his ride as the frontman of VAN HALEN, CHICKENFOOT and his latest best-selling supergroup THE CIRCLE, Hagar has amassed 25 platinum albums on sales surpassing 50 million worldwide. Along his journey, he has set the tone for some of the greatest rock anthems ever written with songs like "I Can't Drive 55", "Right Now" and "Why Can't This Be Love" and earned the highest respect of the music industry with a Grammy Award and induction into the Rock And Roll Hall Of Fame. Since launching his flagship Cabo Wabo Cantina, he's turned a lifelong passion for great food, music and spirits into a thriving and iconic lifestyle brand that now encompass top-shelf labels, Cabo Wabo Tequila (sold in 2008),Sammy's Beach Bar Rum, Santo Tequila, several restaurants and his new spirits venture, Sammy's Beach Bar Cocktail Co.'s sparkling rum cocktails. Never one to hit the brakes, Sammy's also expanded his successes into publishing, TV, radio and beyond, including five seasons of his hit TV show "Rock & Roll Road Trip With Sammy Hagar" and as host of "Sammy Hagar's Top Rock Countdown", a weekly syndicated radio show broadcast airing on over 90 U.S. stations. He's also a No. 1 New York Times bestselling author and dedicated philanthropist.