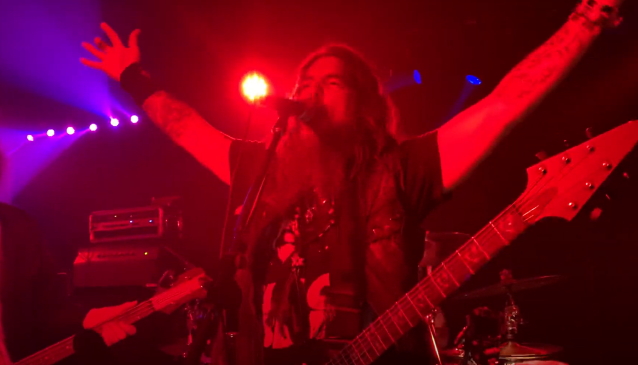 Rob Flynn (MACHINE HEAD) and Craig Locicero (FORBIDDEN) joined the BLACK SABBATH tribute band BACK STABBATH on stage on March 19 at the Elbo Room Jack London in Oakland, California to perform a set of BLACK SABBATH classics. Fan-filmed video of the concert is available below.

Back in 2015, Flynn told Metal Talk that he was 13 years old when he was first introduced to SABBATH's music.

"My family moved around a lot so it was kind of hard to make friends," he recalled. "As a kid, I was pretty introverted. The one thing I did get really into was Bruce Lee; I was obsessed with him. My dad signed me up to take judo and jiu-jitsu lessons with this guy who took me under his wing and brought out a lot of confidence in me. I got to be an orange belt, about halfway towards black belt."

After another move, Flynn found himself away from his mentor and in a new environment where he was sparring with older kids. "I'm going up against dudes who were turning into men," he remembered. "They just kicked my ass — they beat the crap out of me.

"My new sensei demoted me from orange belt back down to a yellow belt, and I was furious. I was, like, 'Fuck this.' A week later, my friend Elvis said, 'Let's go smoke weed.' We raided his dad's stash and got high."

According to Flynn, a turning point came when his friend put on SABBATH's "We Sold Our Souls For Rock'N'Roll". "It had this creepy picture of this dead girl in a coffin and she's got this huge chrome cross laying on her chest," he said. "I just remember being high as fuck and terrified of the music that was coming out of the speakers. I had never heard anything so terrifying and dark and evil. It was a revelation. I wanted to make the sound that was coming out of the speakers. I didn't know what it was, or how to do it. But they were the band that made me want to smoke weed, fuck girls, get snowblind and get drunk. And play the darkest, heaviest, most extreme stuff that I could get my hands on."

MACHINE HEAD recently completed work on a new full-length album for a tentative summer release. Much of the LP was recorded at Sharkbite Studios in Oakland, California with producer Zack Ohren.

Hell Yeah! Word on the street is that Rob Flynn from Machine Head is playing in Back Stabbath!