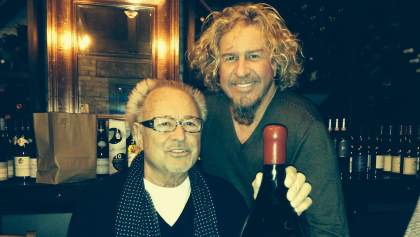 A photo of former VAN HALEN and current CHICKENFOOT vocalist Sammy Hagar and FOREIGNER guitarist Mick Jones "enjoying a great dinner at El Paseo restaurant [in Mill Valley, California] after writing for two days together at [Sammy's] studio" can be seen below. Hagar says: "What a blast — old friends getting together and writing some new songs."

Jones last year recalled producing VAN HALEN's first album without David Lee Roth, 1986's "5150". Jones remembered the first day of sessions at Eddie Van Halen's studio back in 1985, telling Ultimate Classic Rock, "[Sammy Hagar] picked me up at the hotel and we were driving up to Eddie's studio and we were talking about the old days and finally he said, 'I've got to tell you, Mick, all of that was wild and crazy and all of that sort of thing,' but he said, 'We are just about to walk into another dimension of that. . . I wasn't going to tell you earlier, but you'd better get ready for some crazy shit now." I went, 'Whoa . . . ' and I'd been around and seen a lot, you know. But it was pretty crazy up there. It lived up to its title."

He went on to explain, "It was a challenge, because they had a lot of the stuff that they had been writing and it was a new writing partnership with Sammy and Eddie and they were just coming down from the split with David Lee Roth. It was a big time. . . a lot of different things were happening and a lot of emotions were flying around. It was kind of exciting [but] it was [also] scary, thinking, 'Well, what can I do for this band?'

Jones, who produced all of the FOREIGNER hits, shed some light on what he added to the VAN HALEN sound, which in the past had been firmly in the hands of longtime producer Ted Templeman. "I worked a lot on the arrangements and the vocal performances and helping [them] just to find the melodies a bit, especially on 'Dreams' and 'Love Walks In'," he said. "I put my advice and my suggestions in where I felt they merited them. I don't know if you could have gone in with an approach of, 'Oh, I want to change all of this,' which I think would have been disastrous. But I worked on the sound quite a bit."