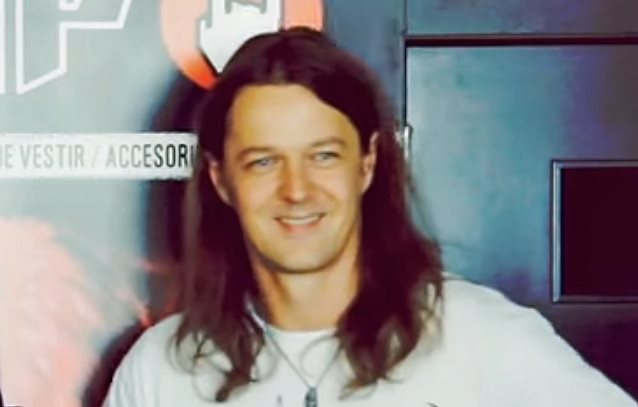 Spain's EMP Live TV conducted an interview with vocalist Sigurd "Satyr" Wongraven of Norwegian black metallers SATYRICON when the band performed at the Leyendas Del Rock festival last August. You can now watch the chat below.

Speaking about his personal regrets, Satyr said: "My regrests are wasting the time and effort and energy of my band with playing small bars and clubs in the Midwest in the early 2000s where there was no apparent interest in Norwegian black metal. I remember SATYRICON, IMMORTAL, KRISIUN and ANGEL CORPSE touring together, and we were all inexperienced when it came to touring the States. In a way, I'm just very thankful for the people who actually came out and supported us."

He continued: "I'm not one of those guys that want to, sort of, build a crowd. What I would like to do is to play in front of people who actually like the type of music that I like as opposed to trying to persuade them to like it."

Satyr recently revealed that he was diagnosed with a brain tumor. The musician broke the news via his Instagram account, where he wrote: "I got extremely sick eight days ago and was rushed to hospital. Scans have shown that there is a blind passenger in my head. Most likely it is benign. I can live with it as long as it does not grow bigger. Removing it is extremely complicated and should only be done if it grows into a size where it is a matter of life and death."

He continued: "We all get our set of cards and this happened to be one of mine. There are so many people who have to deal with much worse things than I do, so I do not feel sorry for myself. I have a great family, lots of friends, SATYRICON, Wongraven Wines and many people who support my endeavours all over the world.

SATYRICON self-titled studio album was released in September 2013 in Norway via Indie Recordings, and in the rest of Europe through Roadrunner Records. The CD, which was made available in North America via Nuclear Blast Entertainment, was produced by Satyr and was recorded in Norway, and mixed by Adam Kasper. The effort features a guest appearance by Sivert Høyem, the Norwegian singer best known as the vocalist of the rock band MADRUGADA.

SATYRICON's "Live At The Opera" DVD was released last year via Napalm Records.