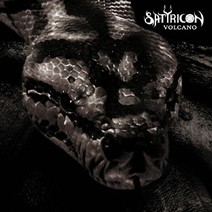 Norwegian black metallers SATYRICON have finalized the track listing for Volcano, their long-awaited new studio album, which is presently due to be released on September 2nd through Capitol Records in Scandinavia and Nuclear Blast Records in other parts of the world. It is as follows:

To view the cover artwork for Volcano, click here.

SATYRICON drummer Frost recently commented on the album's musical direction by saying that "I perceive Volcano as a very dark, eerie and powerful album. Something I find to be really strange about Volcano is that all the songs are sounding very different, yet there is one distinct feeling that is present in all of them. Musical direction? Black metal, created and performed with the unmistakable quality and authority of SATYRICON."

In other news, SATYRICON are tentatively due to embark on a Scandinavian tour beginning on October 3rd in Norway. Exact dates and venues will be announced shortly.