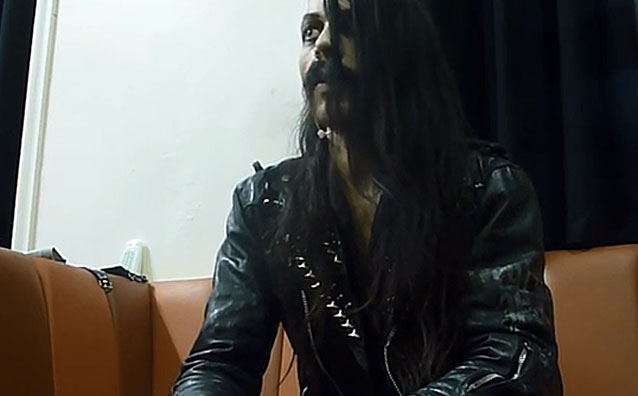 Soundscape magazine conducted an interview with drummer Kjetil-Vidar "Frost" Haraldstad of Norwegian black metallers SATYRICON before the band's November 10 concert in Manchester, England. You can now watch the second part of the chat below.

SATYRICON's video for the song "Phoenix" was released last week. The track features a guest appearance by Sivert Høyem, the Norwegian singer best known as the vocalist of the rock band MADRUGADA.

The performance footage for the "Phoenix" clip was filmed on September 8 at Den Norske Opera & Ballett in Oslo, Norway, where SATYRICON was joined by the 55-strong Norwegian National Opera Chorus as part of the Ultima Oslo Contemporary Music Festival.

"Phoenix" comes off SATYRICON's new, self-titled album, which sold around 1,600 copies in the United States in its first week of release. This is roughly in line with the opening-week performance of the band's previous CD, "The Age of Nero", which premiered with 1,700 units back in November 2008.

"Satyricon" debuted at position No. 1 on the official chart in the band's home country — the first time one of the group's releases topped the chart in Norway. "Satyricon" also saw success internationally, debuting at No. 6 in Finland, No. 23 in Germany and No. 26 in Austria. By comparison, SATYRICON's previous studio album, "2008'a "The Age Of Nero", entered the chart at No. 5 in Norway and No. 73 in Germany.

"Satyricon" was recorded in Norway between January and May 2013 and was produced by SATYRICON frontman Sigurd "Satyr" Wongraven. Mixing took place in Seattle by Adam Kasper and Satyr.

Speaking to Noisecreep at this year's Inferno festival, Satyr stated about SATYRICON's new album: "To me, it sounds very authentic, it's organic-sounding. And in this digital age where music is mostly played through computers, a lot of that analog vibe gets lost in translation when you play music through medias like that, but I still wanna do it because there's nothing quite like it. To me, it just makes everything sound the way it's supposed to sound — it's dynamical; the music is alive, it's not overly compressed, the levels are not pushed. So, musically speaking, it's a very atmospheric record… This record is full of life. There are a lot of surprises here, but I think it's gonna be a record that's gonna help the black metal movement perhaps find a new way for the future."