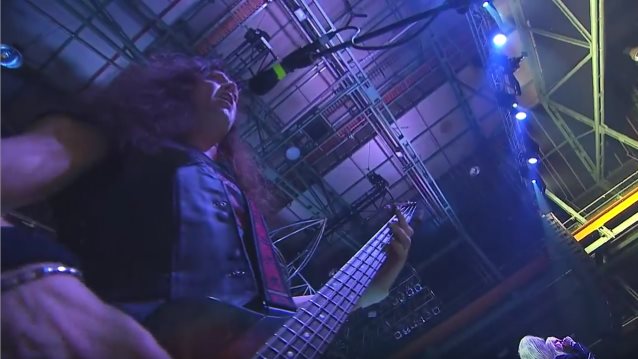 SAXON Bassist To Miss European Shows Due To 'Family Emergency'

British heavy metal legends SAXON will play several shows on their current European tour without bassist Nibbs Carter after he had to urgently return home to his be with his family.

The band explained that "due to a family emergency," Nibbs would not play six gigs, starting on December 11 in Ljubljana, Slovenia and ending n December 18 in Barcelona, Spain. Filling in for him is Greek musician Gus Macricostas, who has previously played with BATTLEROAR.

Carter is expected to rejoin SAXON on stage on December 20 in Villeurbanne, France.

SAXON is contuinung to tour in support of its latest album, "Battering Ram" which came out last year. The effort featured Carter alongside Biff Byford on vocals, Paul Quinn and Doug Scarratt on guitar, and Nigel Glockler on drums.

SAXON recently revealed that its forthcoming follow-up to "Battering Ram" will include a song dedicated to MOTÖRHEAD. "[It's] called'They Played Rock And Roll', 'cause that's what Lemmy [late MOTÖRHEAD frontman] used to say every night [from the stage]," Byford told Sonic Shocks. "It's basically about early MOTÖRHEAD — '79/'80 MOTÖRHEAD, like around 'No Sleep 'Til Hammersmith', 'cause that's the tour we were on, that one. So, yeah, it's about the band, really, and their music."

According to Biff, "They Played Rock And Roll" will be musically similar to Lemmy and Co. He explained: "I asked Nibbs to write me some music that was like MOTÖRHEAD, and he did. So it sounds very MOTÖRHEAD-ish, but not MOTÖRHEAD, if you know what I mean."