SAXON: Special Tour Edition Of 'Thunderbolt' To Be Released In September

British heavy metal legends SAXON will release a special tour edition of their latest album, "Thunderbolt", on September 7. The disc is available for pre-order here.

The special tour edition features live recordings of "Thunderbolt" and "Nosferatu (The Vampire's Waltz)" recorded in Frankfurt and Los Angeles on the 2018 "Thunderbolt" world tour. The CD format also contains a 10" x 10" poster with photos of the band while on tour.

"Thunderbolt" was released in February via Militia Guard (Silver Lining Music). The follow-up to 2015's "Battering Ram" was once again helmed by producer Andy Sneap, who has previously worked with JUDAS PRIEST, MEGADETH, ACCEPT and TESTAMENT, among others. The disc features original artwork by longtime SAXON collaborator Paul Raymond Gregory.

"Thunderbolt" features the song "They Played Rock And Roll", written about and dedicated to MOTÖRHEAD. Byford previously said that he gave the track that title because "that's what Lemmy used to say every night [from the stage]." He added: "It's basically about early MOTÖRHEAD — '79/'80 MOTÖRHEAD, like around 'No Sleep 'Til Hammersmith', 'cause that's the tour we were on, that one. So, yeah, it's about the band, really, and their music."

According to Biff, "They Played Rock And Roll" is musically similar to Lemmy and Co. He explained: "I asked Nibbs [Carter, SAXON bassist] to write me some music that was like MOTÖRHEAD, and he did. So it sounds very MOTÖRHEAD-ish, but not MOTÖRHEAD, if you know what I mean." 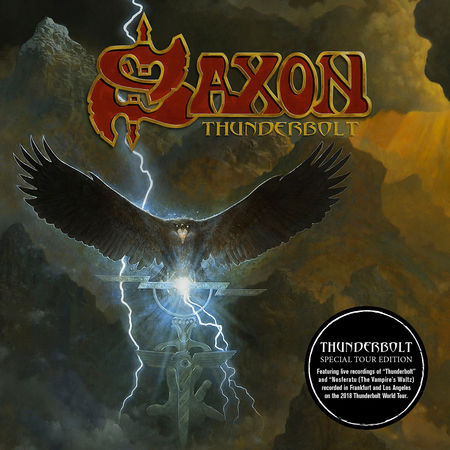