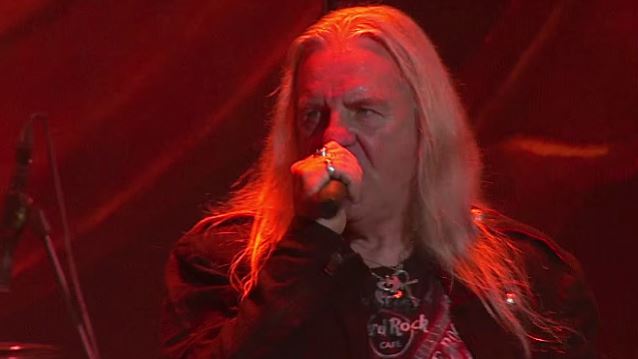 British heavy metal legends SAXON are hard at work on material for their new album, due later in the year. The band's lead vocalist, Biff Byford, tells the "Metal Hammer Magazine Show" on TeamRock Radio: "We have lots of ideas and I've been in the studio with [producer] Andy Sneap [MEGADETH, EXODUS, TESTAMENT, ACCEPT] a couple of times going through the song ideas and melodies and putting titles to the songs. So we have started the next album. We'll be doing that at Andy's [studio] this time and letting him have more control over the album."

He continues: "I'm looking at stories. One of the songs is called 'The Devil's Footprint', which is about the time they woke up — I don't know what year it was, probably 1600s — and there was hoof prints over all the houses. They followed it for miles in the snow. I've written a song about that. Another one is 'Tax Till You Drop'. We can do that, SAXON — we can drop in between classic rock and heavy metal."

Byford also spoke about SAXON's decision to recruit Sven Dirkschneider, the son of legendary ACCEPT frontman Udo Dirkschneider, to sit behind the kit for the band's upcoming U.K. tour, which is scheduled to kick off in early February.

SAXON drummer Nigel Glockler was rushed to hospital last month after suffering a brain aneurysm (a bulging, weak area in the wall of an artery that supplies blood to the brain). He has since undergone two surgeries, but "will not be 100 percent fit" by the start of SAXON's U.K. tour. However, he "will be at the shows to meet and great the VIP ticket holders," according to a posting on the SAXON Facebook page.

Biff says: "He seems to be doing okay now, but I suppose it's a mental thing as well. He has to try come to terms with it and get back to fitness.

"I went to hospital three or four times to see him. He's back to eating his English breakfast and he seems all right. He's tired a lot and needs to sleep, but I suppose that's part of the healing process.

"I don't think he has any sort of problem with his nerves and his movement. It's just a matter of waiting for it all to heal.

"We knew Nigel wouldn't be ready [for the tour]. His drum tech is drumming for us, a young lad called Sven Dirkschneider. His father is Udo from ACCEPT and U.D.O. fame. He's a great drummer.

"I was talking to Nigel when he was in hospital and we were going through different drummers we could use. A lot of guys said they'd do it — Simon Wright [DIO, AC/DC, UFO, DIO DISCIPLES], Mikkey Dee [MOTÖRHEAD]. But Nigel thought that Sven would be good, so we went with that."