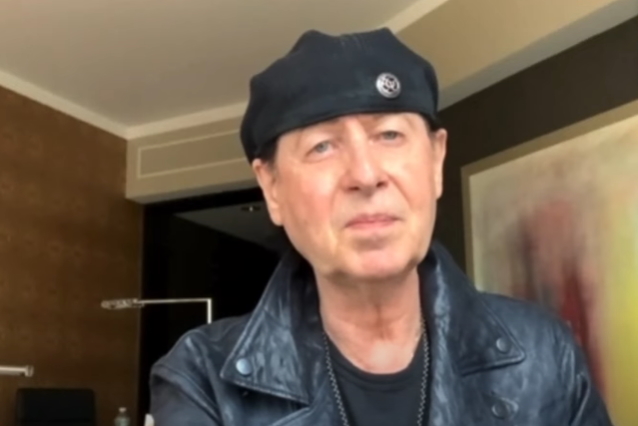 SCORPIONS' KLAUS MEINE Says 'Wind Of Change' 'Has Lost The Meaning Of Being A Peace Anthem, Being A Song Of Hope'

SCORPIONS singer Klaus Meine has once again opened up about his decision to alter some of the words in the band's anti-war anthem "Wind Of Change" order to appropriately reflect what's going on in Europe.

Meine and his bandmates wrote "Wind Of Change" after performing at 1989's Moscow Music Peace Festival in Moscow, where they shared the stage with other hard rock acts like BON JOVI and MÖTLEY CRÜE. The song was inspired by the sight of thousands of Russians cheering them on in 1988 — when they became the first hard rock band to play in Russia — and in 1989, at the aforementioned festival, even though they were a German band.

On March 26, at the opening concert of SCORPIONS' "Sin City Nights" residency at Zappos Theater at Planet Hollywood Resort & Casino In Las Vegas, Nevada, Meine told the crowd before launching into "Wind Of Change": "This song is calling for peace, and tonight, I think, we shall sing it even louder. We dedicate this to the brave people in the Ukraine."

In a new interview with Ukraine's TSN, Klaus explained the thought process behind changing the song's lyrics.

"We were just preparing a new tour," he said (as transcribed by BLABBERMOUTH.NET). "Since the release of the [new SCORPIONS] album ['Rock Believer'] in February, we were preparing a new show, a new set. We were booked for a residency in Las Vegas. I thought this is not the time to romanticize Russia with lyrics like, 'Follow the Moskva / Down to Gorky Park.' And I wanted to make a statement that we support the Ukraine in this very difficult situation.

"When I wrote ['Wind Of Change'], it was about the time when the SCORPIONS went for the first time to the Soviet Union back in '88 when we played 10 shows in Leningrad," he continued. "After all those years living in the shadow of the Berlin Wall, living with the Iron Curtain, to see how we have the chance with music to build bridges and really come together. So it was so very inspired by this moment of hope, hoping for a more peaceful world and just joining together into a peaceful future. And so that was the expression. And so many years later now, I think the song has lost the meaning of being a peace anthem, being a song of hope. But I had to change those lyrics, like I said."

When the Berlin Wall fell in November 1989, "Wind Of Change" accompanied the moving scenes of East Germans passing through the Brandenburg Gate and entering the West for the first time.

According to Meine, he and his bandmates were raised in the West German town of Hannover, which was "a hundred kilometers away from the first checkpoint, in Helmstedt. So that means when we had, as a young band, in the '70s, when we played a show in West Berlin, the world when we grew up as kids in the '60s when the Berlin Wall was built and so many people lost their lives and were shot when they tried to make it from the East to the West, just to live in a free world," he explained. "So this is how we grew up. And it was just a very, very special moment. And a couple of months later, the Berlin Wall came down. And it was a peaceful revolution — without a shot being fired, it was a peaceful revolution."

Klaus went on to say that "the German people support the Ukraine very much. Our generation, we grew up after World War II — we grew up after the darkest time in German history, with the Nazis, with the Holocaust and all that," he said. "So growing up in Germany in the '50s, '60s, it was nothing to be proud of your own country. And with the music, being musicians, we tried to leave it all behind, leave the past behind, and go and become part of the international family of musicians. When we grew up, everything was focused on the way to leave the past behind and hopefully build together a better future for our children. And this is what we try to support with being artists, being musicians, writing songs, joining together and making this planet a better place."

Back in 2015, SCORPIONS guitarist Rudolf Schenker stated about the inspiration for the original version of "Wind Of Change" "We wanted to show the people in Russia that here is a new generation of Germans growing up. They're not coming with tanks and guns and making war — they're coming with guitars and rock 'n' roll and bringing love!"

"There were so many emotional moments in Moscow," Meine added. "I guess it could have been BON JOVI or MÖTLEY CRÜE, any of these guys who had gone home inspired by what they saw, but for them it was like, 'Hey! We rocked the Soviet Union, dudes!' For us, maybe it was different. We saw so many changes from Leningrad in '88 to Moscow in '89. That was the inspiration for 'Wind Of Change'."

"Rock Believer" was released in February. The album was recorded primarily at Peppermint Park Studios in Hannover, Germany and was mixed at the legendary Hansa Studios in Berlin, Germany with engineer Michael Ilbert, who has earned multiple Grammy nominations for his mix work with producer Max Martin on albums by Taylor Swift and Katy Perry.