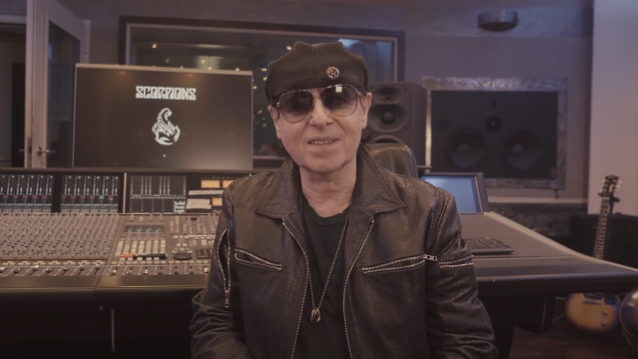 In a brand new interview with the French SCORPIONS fan club Crazyscorps, the band's lead singer Klaus Meine spoke about the lyrical inspiration for the recent SCORPIONS song "When Tomorrow Comes" in which he appears to be "angry about mankind." Asked if feels that humanity is on the brink of extinction, the 74-year-old musician said (as transcribed by BLABBERMOUTH.NET): "When you see what's going on in the world, with climate change, with all those conflicts — from the Middle East to the Ukraine and Russia — and when you see what's going on, you get angry.

"With the end of the Cold War, the world seemed to be wide open; a window was open for a peaceful future," he continued. "And now we it's the opposite. And we're all walking kind of on the edge. And this [song] is just expressing the fear.

"I'm always very optimistic. And I don't think this is the end of the world. But it's frustrating to see mankind is doing the same mistakes again and again."

Meine also addressed the fact that he has always promoted peace with his messages in the SCORPIONS lyrics. Asked how he feels about the state of the world right now, Klaus said: "Well, we live from day to day, and every other day we see the terrible news on TV, every other night what's going on in Ukraine. And we don't know where we go from here.

"I think after all the two and a half years — whatever it was — of the pandemic, where the whole world was shut down, that was a very dark scenario and it was frightening," he continued. "We had no idea what is next. The virus is mutating, and what comes next? So many people were dying. And then the question, vaccination or no vaccination? What is the right vaccination? If you get sick, what is the best way to survive? And will we ever go back on the road again, play concerts again? Will that ever be possible? Nobody knew. So we were very lucky that we could use these terrible times and go in the studio and create something new. We were very lucky, really, because it was also like being not only in the studio but in a survival camp. We were living in our own bubble, and the world outside was very dark. Now in '23, it seems to be, for most of it, it's over with the pandemic. At least it's more under control. I mean, to say it's all over is maybe also a little too optimistic — I don't know — but I like to think it's over, or at least it's under control. And maybe we have to live with this virus, like with so many other — when you get sick from a flu every other year, we have to live with this virus maybe. But we know how to deal with it now, and the medical department knows what to do and how to deal with it."

SCORPIONS's latest album, "Rock Believer", was released in February 2022. The LP was recorded primarily at Peppermint Park Studios in Hannover, Germany and was mixed at the legendary Hansa Studios in Berlin, Germany with engineer Michael Ilbert, who has earned multiple Grammy nominations for his mix work with producer Max Martin on albums by Taylor Swift and Katy Perry.