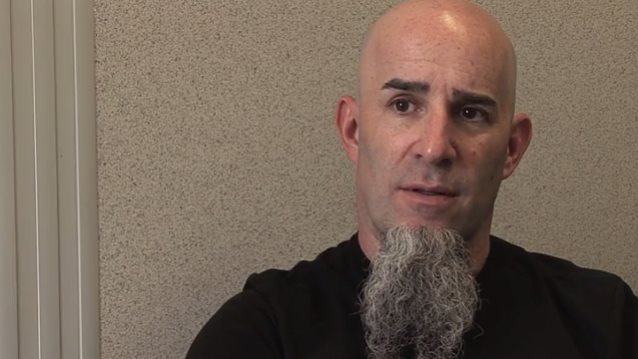 SCOTT IAN: 'The Only Way ANTHRAX Ever Stops Is If We Decide It Stops'

Cutter of Envision Radio Networks' "Hangar 19" podcast recently conducted an interview with ANTHRAX guitarist Scott Ian. You can now listen to the chat using the audio player below.

Asked how ANTHRAX has managed to remain a band despite all the lineup changes and drama that he and his bandmates have gone through over the years, Ian said: "We just never… We would never take 'no' for an answer. It's just who we are as people."

He continued: "Nobody can take away what we're doing. The only way ANTHRAX ever stops is if we decide it stops. So in the '90s, when the business changed and things started to go awry for us, like at [ANTHRAX's former record label] Elektra and then after that, all the way through to 2000s, pretty much up to, like, 2010… And it's not like people were out there trying to get rid of ANTHRAX, but it's just the business became a place where it was hard for a band like us to survive. And you know what?! We just put put our heads down and we said, 'Look, we were doing this before we were anything. Before we had a record deal, we were a working band, and that's all we did. And we put our heads down and we just went to work. And we just continued touring and we wrote songs and we made records and we just continued doing what we were doing. And the strength of that, and also the strength of people all around the world who like what we do, and who dig what we do, and who enable us to do what we do — our fans — they kept us alive all those years until suddenly in 2010, there was a little shift and things started to change again and then all of a sudden your brand becomes something that's, like, 'Oh, everybody wants to see ANTHRAX again.' And there's a whole new generation of fans — two new generations of fans — so it was just a case of, really, just putting our heads down and staying busy."

Ian's autobiography, "I'm The Man: The Story Of That Guy From Anthrax", was released on October 14 via Da Capo Press.

ANTHRAX issued a live-in-concert DVD "Chile On Hell", on September 16. The effort was filmed at the Teatro Caupolican in Santiago, Chile on May 10, 2013 and features ANTHRAX performing an extended set that featured songs from the band's entire catalog.