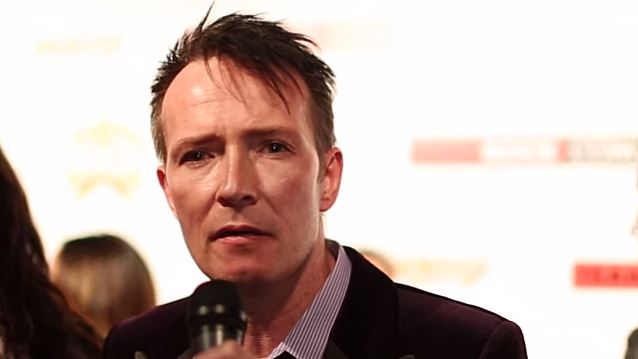 On January 6, former STONE TEMPLE PILOTS and VELVET REVOLVER singer Scott Weiland was interviewed on the "Lamont And Tonelli Show", which airs on the Bay Area rock station 107.7 The Bone. You can listen to the chat using the audio player below. A couple of excerpts follow (transcribed by BLABBERMOUTH.NET).

On whether he thinks he could get along with Slash now that the VELVET REVOLVER guitarist is getting divorced from his wife, Perla Hudson:

Weiland: "I have no problem with Slash. I have no problem with him at all. I wouldn't be opposed to, at some point, doing a [VELVET REVOLVER] reunion tour. That's just coming from my perspective, though. I know there's been a little banter before. And he was doing his own solo project, so he defused that. But, you know… That's the thing about rock and roll: you never can say never."

On which band he would choose to go back to — STONE TEMPLE PILOTS or VELVET REVOLVER — if he was forced to pick one:

Weiland: "That's a difficult one, because there was all the stuff that went on with me leaving STP, it made things really confusing. And all I can say is, time heals wounds. And it would depend on what the situation was, really. It's a hard one to say. I mean, I had great years with both bands and a great career with both bands."

STP fired Weiland in February 2013, claiming that his own solo activities and erratic behavior were detrimental to the band. The group said in a statement, "We want to move forward productively, and Scott's choices and actions have prevented us from doing that… It was beyond time we made some new music, which was impossible in the dysfunctional environment we were in. We've lived in it long enough and have decided to move forward with STP."

The group sued Weiland, with the singer firing off a countersuit and claiming that they could not use the band name without his involvement. He also told AZCentral that his former bandmates were "selfish" and "disrespectful."

STONE TEMPLE PILOTS's "High Rise" EP — featuring LINKIN PARK singer Chester Bennington on vocals — sold 12,000 copies in the United States in its first week of release to land at position No. 24 on The Billboard 200 chart. The CD arrived in stores on October 8, 2013 via Play Pen/ADA.