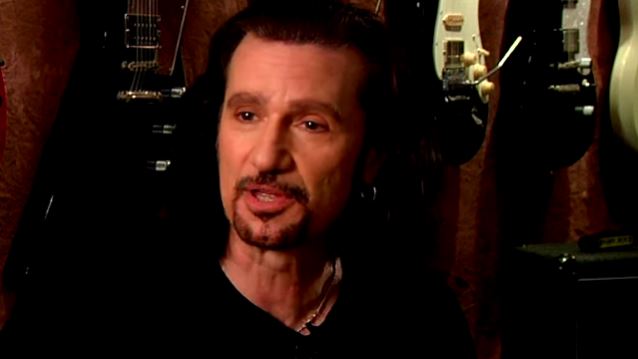 Journey Of A Frontman recently conducted an interview with former KISS guitarist Bruce Kulick. A couple of excerpts from the chat follow below.

On KISS possibly continuing to perform as a band without Gene Simmons and Paul Stanley:

"We're not there yet. [laughs] I know that Eric [Singer, drums] made some comments saying he wouldn't be into it. And I don't think he would be into it. I think it would be kind of weird, because you'd have twenty, thirty years in the band and then be playing with guys that are cover guys. Bands like JUDAS PRIEST having Ripper Owens pop in for a while, he did a good job. Or JOURNEY with the Philippine kid that can sing like Steve Perry. I think that that model works.

"I mean, look, Gene and Paul didn't wanna work with Ace [Frehley], [and] Peter [Criss] was done. It's possible to insert somebody else to do that. So I don't even think what they're doing now is wrong at all. And honestly, I think it would be completely different if Gene and Paul were actually ready to step down. They're not ready to step down yet. But, obviously, KISS fans love the conjecture of 'what if?' and 'what do you think?' Everyone goes wild, the boards and everything. It's very askew in many directions. And I know Doc [McGhee, KISS's manager] had said some things about it, then Gene says, 'It's not true! Paul would come out and say something like that. Nothing like that is happening!'

"It's silly to talk about while they're still very vital and hungry and relevant and out there. But I don't think just because Gene or Paul would say that they're retiring that Tommy [Thayer, guitar] and Eric would still hang around, even though they're little younger. Tommy's actually the youngest. I think it would be a whole different angle if something else would happen. That's just my opinion. I have no facts behind it.

"I think what they created is iconic. I wasn't part of that version of KISS, and yet, I'm a part of it. So there's a whole another era that I represent. And I know there's many fans that really love that too. It's not as identifiable, but certainly unique. Many great albums and songs and tours, that's what I concentrate on. But certainly, these guys could carry on the four iconic characters in many, many shapes. That's why merchandising is unbelievable. And now they're doing something with a Japanese artist, doing stuff like that. They were big with Hello Kitty.

"It's really incredible what they created. Truly incredible. It's timeless and it keeps attracting new generations. And then when they get really into it, the parent pops in and notices something like 'KISS Unplugged'. Then they're mesmerized by it. And it's still KISS. With no crazy outfits.

"I can't believe how many of these young kids that might meet me at an event or something and they're just so enamored with me. I didn't wear any makeup or anything, but I did get to perform that music. I got to be presented in the manner of lead guitarist with KISS."

On possibly releasing an autobiography:

"There was a time about ten years ago where I was actually working really actively with a guy in the industry on a book. He really knew KISS and knew a lot about me. I remember having some interviews done with some really cool people like Bob Ezrin and my mom. He got really busy with it and with me. I remember when we started to think about shopping it, everybody was like, 'Alright, so you've got a lotta dirt, right? And you'll throw this guy under the bus, you're gonna complain about this, you're gonna let everything out of the closet that you ever even imagined.' And I'm, like, 'No…' Then I realized that's the only thing they're interested in.

"The idea is that [in order] to get an advance to do a book, it needed to be all about saying whatever bad you could. And that's what they were interested in.

"I remember [MÖTLEY CRÜE's band autobiography] 'The Dirt' being very popular at the time. Look, MÖTLEY CRÜE is very controversial. I know Nikki [Sixx, bass] very well, but come on! When I was in KISS, there was nothing like that going on where it was so crazy. There was rock 'n' roll and fun, but there wasn't all this crazy debauchery and drugs. It wasn't that. So that really took the enthusiasm out of it.

"It's been really a lot of fun to go through that stuff like 'Revenge' track by track and the tour or the most recent big anniversary, 'Hot In The Shade'. And I'm looking at all of those things as being a part of the book. Besides the stuff that I started with ten years ago for a book, I can expound upon all that and really make them even larger.

"The reaction that I get from all that stuff is wonderful. I think people really enjoy the little tidbits that I have of everything that I did during the KISS years and how I felt about certain things.

"I wouldn't call it a book like 'The Dirt', but I will talk about things like how I didn't like drum machines and I didn't know why we were using that. It's a way to be a little critical without throwing someone under the bus and saying really bad things about people that I really admired working with."

Read the entire interview from Journey Of A Frontman.